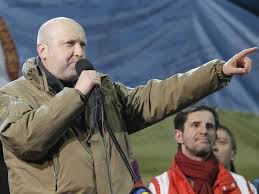 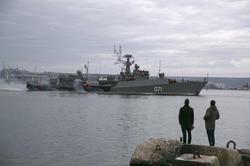 KIEV/BALACLAVA, Ukraine (Reuters) – Ukraine mobilized for war on Sunday and Washington threatened to isolate Russia economically, after President Vladimir Putin declared he had the right to invade his neighbor in Moscow’s biggest confrontation with the West since the Cold War.

“This is not a threat: this is actually the declaration of war to my country,” Ukraine’s Prime Minister Arseny Yatseniuk said in English. Yatsenuik heads a pro-Western government that took power when the country’s Russia-backed president, Viktor Yanukovich, was ousted last week.

Putin secured permission from his parliament on Saturday to use military force to protect Russian citizens in Ukraine and told U.S. President Barack Obama he had the right to defend Russian interests and nationals, spurning Western pleas not to intervene.

Russian forces have already bloodlessly seized Crimea, an isolated Black Sea peninsula where Moscow has a naval base.

On Sunday they surrounded several small Ukrainian military outposts there and demanded the Ukrainian troops disarm. Some refused, leading to standoffs, although no shots were fired.

With Russian forces in control of majority ethnic Russian Crimea, the focus is shifting to eastern swathes of Ukraine, where most ethnic Ukrainians speak Russian as a native language.

Those areas saw more demonstrations on Sunday after violent protests on Saturday, and for a second day pro-Moscow activists hoisted flags at government buildings and called for Russia to defend them.

Russia has staged war games with 150,000 troops along the land border, but so far they have not crossed. Kiev said Russia had sent hundreds of its citizens across the border to stage the protests.

Ukraine’s security council ordered the general staff to immediately put all armed forces on highest alert. However, Kiev’s small and under-equipped military is seen as no match for Russia’s superpower might.

The Defence Ministry was ordered to stage a call-up of reserves, meaning theoretically all men up to 40 in a country with universal male conscription, though Ukraine would struggle to find extra guns or uniforms for significant numbers of them.

U.S. Secretary of State John Kerry condemned Russia for what he called an “incredible act of aggression” and brandished the threat of economic sanctions.

“You don’t just, in the 21st century, behave in 19th century fashion by invading another country on a completely trumped-up pretext,” Kerry told CBS program Face the Nation.

Kerry said Moscow still had a “right set of choices” to defuse the crisis. Otherwise, G8 countries and other nations were prepared to “to go to the hilt to isolate Russia”.

“They are prepared to isolate Russia economically. The rouble is already going down. Russia has major economic challenges,” he said. He mentioned visa bans, asset freezes and trade isolation as possible steps.

Analysts said U.S. economic sanctions would likely have little impact on Russia unless they were accompanied by strong measures by major European nations, which have deeper trade ties with Moscow and are dependent on Russian gas.

A Kremlin spokesman declined to comment after Kerry’s remarks.

Ukraine’s envoy to the United Nations said Kiev would ask for international military support if Russia expanded its military action in his country.

“If there is a need to protect the nation, we will go and defend the nation,” said Oleh, an advertising executive cooking over an open fire at the square where he has been camped for three months. “If Putin wants to take Ukraine for himself, he will fail. We want to live freely and we will live freely.”

The new government announced it had fired the head of the navy and launched a treason case against him for surrendering Ukraine’s naval headquarters to Russian forces in the Crimean port of Sevastopol, where Moscow has a major naval base.

REACTION FROM THE WEST

Obama spoke to Putin for 90 minutes by telephone on Saturday after the Russian leader declared he had the right to intervene and quickly secured unanimous approval from his parliament.

The Kremlin said Putin told Obama Russian speakers were under threat from Ukraine’s new leaders, who took over after Yanukovich fled huge protests against his repression and rejection of a trade deal with the European Union.

Putin reiterated this stance in a telephone call with German Chancellor Angela Merkel on Sunday, the Kremlin said, adding that he and Merkel agreed that Russia and Germany would continue consultations to seek the “normalization” of the situation.

Ukraine, which says it has no intention of threatening Russian speakers, has appealed for help to NATO, and directly to Britain and the United States, as co-signatories with Moscow to a 1994 accord guaranteeing Ukraine’s security.

After an emergency meeting of NATO ambassadors in Brussels, the alliance called on Russia to bring its forces back to bases and refrain from interfering in Ukraine.

But despite expressing “grave concern”, NATO didn’t agree any significant measures to apply pressure to Russia, with the West struggling to come up with a forthright response that does not risk pushing the region closer to military conflict.

“We urge both parties to immediately seek a peaceful solution through bilateral dialogue, with international facilitation … and through the dispatch of international observers under the auspices of the United Nations Security Council or the Organisation for Security and Cooperation in Europe,” NATO said in a statement.

Washington on Saturday proposed sending monitors to Ukraine under the U.N. or OSCE flags. The United States has won tentative support from many members of the OSCE, Europe’s main human rights and democracy watchdog, for such a mission, its envoy to the group said on Sunday.

So far, the Western response has been largely symbolic. Obama and others suspended preparations for a G8 summit in Sochi, where Putin has just finished staging his $50 billion winter Olympic games. Some countries recalled ambassadors. Britain said its ministers would stay away from the Paralympics due next in Sochi.

But Germany’s Foreign Minister, Frank-Walter Steinmeier, urging world leaders on Sunday to work to calm the crisis, defended Russia’s membership of the G8, saying it enabled the West to talk directly with Moscow.

Ukraine’s military is ill-matched against its neighbor. Britain’s International Institute of Strategic Studies estimates Kiev has fewer than 130,000 troops under arms, with planes barely ready to fly and few spare parts for a single submarine.

Russia, by contrast, has spent billions under Putin to upgrade and modernize the capabilities of forces that were dilapidated after the breakup of the Soviet Union. Moscow’s special units are now seen as equals of the best in the world.

In Crimea, Ukraine’s tiny contingent made no attempt to oppose the Russians, who bore no insignia on their uniforms but drove vehicles with Russian plates and seized government buildings, airports and other locations in the past three days.

Kiev said its troops were encircled in at least three places. It pulled its coast guard vessels out of Crimean ports. Ukraine said its naval fleet’s 10 ships were still in Sevastopol and remained loyal to Kiev.

Scores of Russian troops with no insignia were camped outside a base of Ukrainian troops at Perevalnoye, on a road from Crimea’s capital Simferopol towards the coast.

A representative of the base commander said troops on both sides had reached agreement so no blood would be shed.

“We are ready to protect the grounds and our military equipment,” Valery Boiko told Reuters television. “We hope for a compromise to be reached, a decision, and as the commander has said, there will be no war.”

Igor Mamchev, a Ukrainian navy colonel at another small base outside Simferopol, told Ukraine’s Channel 5 TV that a truckload of Russian troops had arrived at his checkpoint and told his forces to lay down their arms.

“I replied that, as I am a member of the armed forces of Ukraine, under orders of the Ukrainian navy, there could be no discussion of disarmament. In case of any attempt to enter the military base, we will use all means, up to lethal force.”

A unit of Ukrainian marines was also holed up in a base in the Crimean port of Feodosia, where they refused to disarm.

Elsewhere on the occupied peninsula, the Russian troops assumed a lower profile on Sunday after the pro-Moscow Crimean leader said overnight that the situation was now “normalized”.

Putin’s justification citing the need to protect Russian citizens was the same as he used to launch a 2008 invasion of Georgia, where Russian forces seized two breakaway regions.

In Russia, state-controlled media portray Yanukovich’s removal as a coup by dangerous extremists funded by the West and there has been little sign of dissent with that line.

Pro-Moscow demonstrators flew Russian flags on Saturday and Sunday at government buildings in cities including Kharkiv, Donetsk, Odessa and Dnipropetrovsk. In places they clashed with anti-Russian protesters and guards defending the buildings.

Ukrainian parliamentarian Hrygory Nemyriya, a spokesman to foreign journalists for the new authorities, said the pro-Moscow marchers were sent from Russia.

The worst violence took place in Kharkiv, where scores of people were hurt on Saturday when thousands of pro-Russian activists, some brandishing axe handles and chains, stormed the regional government and fought pitched battles with a smaller number of supporters of Ukraine’s new authorities.

In Donetsk, Yanukovich’s home city, the local government building was flying the Russian flag for the second day on Sunday. The local authorities have called for a referendum on the region’s status, a move Kiev says is illegal. A pro-Russian “self-defence” unit held a second day of protest, attracting about 1,000 demonstrators carrying Russian flags.

Thomson Reuters journalists are subject to an Editorial Handbook which requires fair presentation and disclosure of relevant interests.

This copy is for your personal, non-commercial use only. To order presentation-ready copies for distribution to colleagues, clients or customers, use the Reprints tool at the top of any article or visit: www.reutersreprints.com.