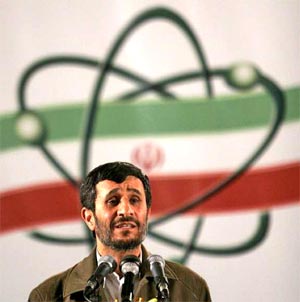 The January/February 2012 issue of the magazine Foreign Affairs features an article with the shocking title: Time to Attack Iran: Why a Strike Is the Least Bad Option. It is indicative of the current mood and may set the tone for the rest of the year.

Iran was at the top of the agenda at the end of 2011, and that has not changed in the new year. In response to the Western countries’ intention to ban the purchase of Iranian oil, Tehran threatened to close the Strait of Hormuz, the transit route for a fifth of the world’s oil. The United States has warned that any attempts to close the strait may be met with military force. Washington will not tolerate any threats to the freedom of navigation, a pillar of U.S. global dominance.

Why has the U.S.-Iran standoff suddenly intensified? It is unlikely that Tehran has dramatically advanced its nuclear program, though it clearly sought to provoke the United States and its Western allies by announcing the early launch of a new uranium enrichment plant. Even U.S. Defense Secretary Leon Panetta told the Washington Post that, in his opinion, “Iran is laying the groundwork for making nuclear weapons someday, but is not yet building a bomb.” As with Libya a year ago, the U.S. military is not advocating war. “The responsible thing to do right now is to keep putting diplomatic and economic pressure on them [Iran] to force them to do the right thing,” Panetta said.

Tensions have escalated recently because for the first time in the many years of debate over Iran’s nuclear ambitions, non-proliferation is now viewed in the context of the regional confrontation between the Sunni regimes of large Arab countries and Iran’s Shiite government, fanned by the Arab Spring.

The United States is focused on the global dimension of the problem. A nuclear Iran would be a heavy blow to U.S. prestige after 15 years of trying to prevent this outcome. As for Saudi Arabia, Qatar, the United Arab Emirates and other Arab monarchies, they are concerned with the issue of regional dominance. The overthrow of Saddam Hussein, who had been the main counterweight to Iran’s regime, has greatly strengthened Tehran. The Arab Spring offered a chance for retaliation by undermining Syria’s Bashar al-Assad, the main ally of Iran and a sponsor of Lebanon’s Shiite Hezbollah movement. If the Syrian government falls, the balance of power in the region, which has already been shaken up, will change dramatically.

The United States is ambivalent. On the one hand, we see the formation of a sort of “coalition of the willing,” a phrase coined by Donald Rumsfeld, Secretary of Defense from 2001 to 2006 under President George W. Bush. The coalition includes Arab monarchies, Israel and the United States, which want to resolve the Iranian issue, although for different reasons. On the other hand, Washington is reluctant to be drawn into regional intrigue, with the leading Arab countries, primarily the rich Gulf monarchies, essentially calling the shots. This would not suit U.S. interests after Barack Obama has said that the United States is “turning the page on a decade of war.”

What role is Russia playing in all this? Traditionally Moscow has been against excessively pressuring or, worse yet, using military force against Iran. Russia’s basic approach, which it deviated from in the case of Libya, is that interference in the internal affairs of other countries is impermissible, especially since the pretext most often differs from the real objective (see Iraq and Libya).

By now we are familiar with Iran’s game. Its show of resolve will likely be followed by a new series of peace proposals directed mainly at Russia and China. This has happened before, but Russia’s protection of Iran is not unconditional. Following news of Iran’s new uranium enrichment plant, the Russian Foreign Ministry clearly indicated that the will of the international community must not be disregarded.

However, if we put ideological considerations and preferences aside, a military operation against Iran could benefit Russia by slowing Iran’s nuclear weapons program. Russia and other countries do not need a nuclear-armed Iran. At the same time, a conflict would increase oil prices, which would benefit Russia, even if only in the short term. And finally, the United States would become bogged down in Iran and hence distracted from the post-Soviet space. Furthermore, the more problems Washington has in Central Eurasia, the more it will depend on Russian assistance. As with Afghanistan and the Russian transit route, Iran could strengthen Russia’s importance as a U.S. partner.

Tehran and Washington so far have been careful not to cross the line in their diplomatic and military brinksmanship. That being said, only a fool would make predictions in this era of global uncertainty.

The views expressed in this article are the author’s and may not necessarily represent those of RIA Novosti.

Is Russia unpredictable? Perhaps, but one shouldn’t exaggerate – its randomness often follows a consistent pattern. But is the world at large predictable? The past two decades have seen all forecasts refuted more than once and have taught us only one thing – to be ready for any change. This column is on what the nations and governments are facing in the era of global uncertainty.

Fyodor Lukyanov is Editor-in-Chief of the Russia in Global Affairs journal – the most authoritative source of expertise on Russian foreign policy and global developments. He is also a frequent commentator on international affairs and contributes to various media in the United States, Europe and China, including academic journals Social Research, Europe-Asia Studies, Columbia Journal of International Affairs. Mr. Lukyanov is a senior member of the Council on Foreign and Defense Policy and a member of the Presidential Council on Human Rights and Civic Society Institutions. He holds a degree from Moscow State University.