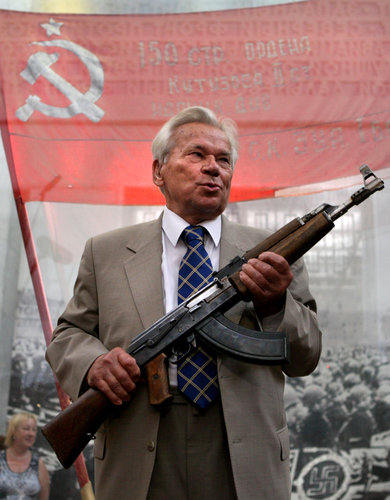 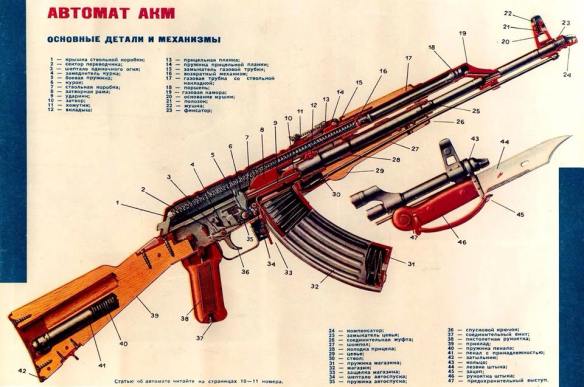 Lt. Gen. Mikhail T. Kalashnikov, the arms designer credited by the Soviet Union with creating the AK-47, the first in a series of rifles and machine guns that would indelibly associate his name with modern war and become the most abundant firearms ever made, died on Monday in Izhevsk, the capital of the Udmurtia republic, where he lived. He was 94.

Viktor Chulkov, a spokesman for the republic’s president, confirmed the death, the Itar-Tass news agency reported.

Born a peasant on the southern Siberian steppe, General Kalashnikov had little formal education and claimed to be a self-taught tinkerer who combined innate mechanical skills with the study of weapons to conceive of a rifle that achieved battlefield ubiquity.

His role in the rifle’s creation, and the attention showered on him by the Kremlin’s propaganda machine, carried him from conscription in the Red Army to senior positions in the Soviet arms-manufacturing bureaucracy and ultimately to six terms on the Supreme Soviet.

Tens of millions of Kalashnikov rifles have been manufactured. Their short barrels, steep front-sight posts and curved magazines made them a marker of conflict that has endured for decades. The weapons also became both Soviet and revolutionary symbols and widespread instruments of terrorism, child-soldiering and crime.

The general, who sometimes lamented the weapons’ unchecked distribution but took pride in having invented them and in their reputation for reliability, weathered the collapse of the Soviet Union to assume a public role as a folk hero and unequivocal Russian patriot.

A Soviet nostalgist, he also served as the unofficial arms ambassador of the revived Russian state. He used public appearances to try to cast the AK-47’s checkered legacy in a positive way and to complain that knockoffs were being manufactured illegally by former Soviet allies and cutting into Russian sales.

The weapon, he said, was designed to protect his motherland, not to be used by terrorists or thugs. “This is a weapon of defense,” he said. “It is not a weapon for offense.”

General Kalashnikov’s public life resulted from a secret competition to develop the Soviet infantry rifle for the Cold War. The result was the AK-47 — an abbreviation for “the automatic by Kalashnikov” followed by the year the competition ended.

General Kalashnikov, a senior sergeant at the time who had been injured in battle against German tanks, was credited with leading the design bureau that produced the AK-47 prototype. The Soviet Union began issuing a mass-produced version to soldiers in 1949.

The true AK-47 was short-lived. It was followed in the 1950s by a modernized version, the A.K.M., which retained its predecessor’s underlying design while reducing its weight and manufacturing time.

Shorter than traditional infantry rifles and firing a cartridge midway between the power of a pistol and the standard rifle cartridges of the day, the Kalashnikov line was initially dismissed by American ordnance experts as a weapon of small consequence. It was not particularly accurate or well made, they said, and it lacked range and stopping power.

It cemented its place in martial history in the 1960s in Vietnam, where a new American rifle, the M-16, experienced problems with corrosion and jamming in the jungles, while Kalashnikovs, carried by Vietcong guerrillas and North Vietnamese soldiers, worked almost flawlessly.

The weapon’s design was also incorporated into arms manufactured in Finland, Israel, South Africa and other nations. The result was a long line of derivatives and copies. Almost all are referred to as AK-47s by colloquial, if inaccurate, shorthand.

Because Kalashnikov rifles were principally made by secretive governments and often changed hands in nontransparent transfers, it is not known how many have been manufactured. Common estimates put production at 70 to 100 million; either number would dwarf the production of any other gun.

The rifles eventually filled armories throughout Eastern Europe and Asia and spread from war to war, passing to Soviet allies and proxies, and to terrorists and criminals, aided by intelligence agencies and gray- and black-market sales. The United States became an active purchaser, arming anti-Soviet fighters in Afghanistan in the 1980s and indigenous Afghan and Iraqi forces in recent years.

General Kalashnikov’s bureau also used the A.K.M. design to develop machine guns for infantry squads, helicopter crews and vehicles. By the 1970s, the rifle’s design had become the basis for a new Soviet rifle, known as the AK-74, that fired a smaller and faster cartridge similar to that of the M-16. That rifle remains the standard arm of the Russian Army.

The general often claimed that he never realized any profit from his work. But in his last years he urged interviewers not to portray him as poor, noting that he had a sizable apartment, a good car and a comfortable dacha on a lake near the factory where he had worked for decades.

Work and loyalty to country, he often suggested, were their own rewards. “I am told sometimes, ‘If you had lived in the West you would have been a multimillionaire long ago,’  ” he said. “There are other values.”

How essential the general was to creation of the Kalashnikov line has been subject to dispute. A post-Soviet account in the newspaper Pravda challenged his central role, asserting that two supervisors repeatedly modified his weapon during field trials.

An amiable personality with a biography ideal for proletarian fable, he was given credit for their work, the newspaper claimed. The general fiercely disputed suggestions that the design was guided by others, but also said the rifle was the result of the entire collective that labored beside him.

The Kremlin embraced his version, although a careful reading of the official histories and General Kalashnikov’s many statements and memoirs shows that his accounts of his life, combat service and work repeatedly changed, raising questions about the veracity of the conventional accounts.

Mikhail Timofeyovich Kalashnikov was born in Kurya on Nov. 10, 1919. He was married twice, the second time to Ekaterina Kalashnikova, a technician in his design bureau. He is survived by a son from his first marriage, Viktor Kalashnikov, who is also an arms designer; a daughter from his second marriage, Elena Krasnovskaya; a stepdaughter, Nelya; and several grandchildren.

Later in life, he disapproved of anyone who he thought had hastened the Soviet Union’s downfall, or who had been unable to control the political and economic turbulence that followed. In memoirs and interviews, he was harshly critical of Mikhail S. Gorbachev and Boris N. Yeltsin.

To the end he remained loyal to what he called Socialist ideals and the leaders who gave them shape, and seemed untroubled by the hardships endured by his family during the early years of Soviet rule. His family’s land and home had been seized during collectivization, and when he was a child the family was deported into the Siberian wilderness. His father died during their first Siberian winter, and one of his brothers labored for seven years as a prisoner digging the White Sea canal.

Still, General Kalashnikov spoke of his great respect for Lenin and Stalin alike. “I never knew him personally,” he said of Stalin, “and I regret this.”