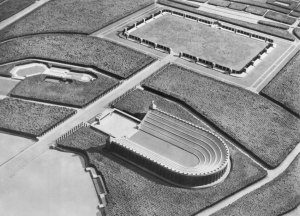 Seventy-five years ago, Adolf Hitler laid the cornerstone in Nuremberg for what was meant to be the world’s biggest stadium. It was never completed, but a gigantic test grandstand was erected on a Bavarian hillside 40 kilometers away, just to test the acoustics and sight lines. Its concrete remains convey Hitler’s crazed megalomania.

It must have been a glorious day for the tiny village of Achtel, in Hirschbachtal, not far from the southern German city of Nuremberg. Adolf Hitler himself had bestowed the honor of his presence along with his architect Albert Speer and several top Nazi party officials. Photographers couldn’t get enough of what they thought would become a magnificent moment in history. The high-ranking delegation had come to inspect a massive construction site on a local hill — one that had begun taking shape in recent months — and which seemed radically out of place. 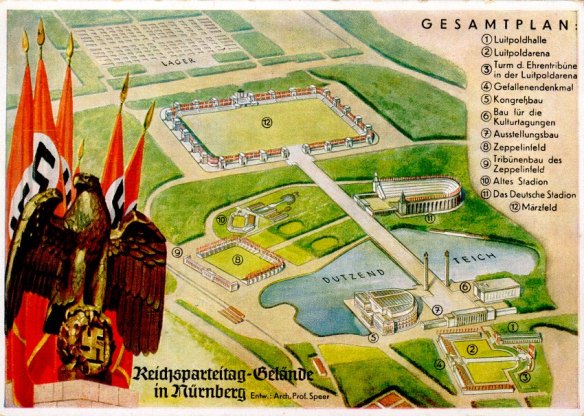 Small and disoriented, that is how visitors were supposed to feel in the presence of the edifice being built. Hitler himself referred to it as “words of stone,” which, he added, were to be stronger than anything that could ever be spoken.

Several months prior to his visit to Achtel, on Sept. 9, 1937, the Nazi leader laid the corner stone for what he hoped would become the “world’s biggest stadium.” The ceremony took place in conjunction with the Reich Party Congress — held every year in Nuremberg on the anniversary of the failed 1923 Beer Hall Putsch. And the stadium was to be constructed in Nuremberg. On the occasion of the cornerstone celebration, Hitler presented a two-meter high model of the planned new construction in front of 24,000 people. The stadium was to have room for more than 400,000 spectators. Excavation began in 1938, but they didn’t get much further than that. Construction in Nuremberg ceased only one year later due to the outbreak of World War II.

And yet workers continued working on the stadium, just not in Nuremberg. Some 40 kilometers (25 miles) away, in Achtel, five levels of stadium seating went up, enough for some 40,000 spectators, about a tenth of the planned capacity. The levels were a test for what, it was hoped, would eventually become the Deutsche Stadion, or German stadium. They were erected between 1937 and 1938 at a scale of 1:1.

Four hundred workers labored for 18 months on the test bleachers. They had to clear a hillside, which had the same gradient as the seating area of the planned stadium. Afterwards, the cement was poured for the foundations and retaining walls for a total of five seating levels. Finally, wooden grandstands were erected with two different angles of inclination — 27.2 and 30 degrees respectively. In the end, two 27 meter (88 feet) wide, 76.6 meter deep and 82 meter high stadium sections were constructed — guarded by SS troops around the clock.

Finally, the test section was ready and, on March 21, 1938, Hitler, Speer and the other top Nazis came for an inspection. Indeed, the entire effort was solely so that the dictator and the architect could inspect the sight-lines and accoustics that would be offered in the final stadium once completed.

‘This Building Will Still be Standing Centuries From Now’

On the lawn below, units of the Reicharbeitsdienst, or Reich Labor Service, conducted gymnastics drills. How much their audience could see, seated as they were in the top levels of the bleachers some 80 meters (260 feet) away, remains a matter of speculation. Speer in any case, noted vaguely after the inspection that he found the view “more positive” than he had expected.

Prior to construction, the architect had pointed out to the Nazi dictator that the measurements of “his” playing fields did not match official Olympic dimensions. But Hitler was unconcerned and retorted: “That’s totally unimportant. The 1940 Olympics will be taking place in Tokyo. But after that they will be held for all eternity in Germany — and in this stadium. And it is we who will determine how the sporting field is measured.” The plan was to have the German Stadium completed in time for the 1945 Reich Party Congress.

Speer’s design was inspired by the ancient Greek stadium at the archaeological site of Olympia he had visited in 1935. Unlike in Greece, though, the stadium in Nuremberg was to stand on flat ground rather than follow the contours of the land.

The Deutsche Stadion would have been around 800 meters long and 450 meters wide, and its external façade would have been 90 meters high. Several express elevators would have carried spectators to the upper levels. Two gigantic towers would have stood at either end of the horseshoe shaped building, providing perches for enormous eagles with wing spans of 15 meters. In his memoirs, Speer said he had discussed the projected costs with Hitler, who had shown no reservations. “That’s less than two Bismarck class battleships. Look how quickly an armored ship gets destroyed, and if it survives it becomes scrap metal in 10 years anyway,” Hiter had said. “But this building will still be standing centuries from now.”

By the time war broke out, construction work on the test site in Hirschbachtal had stopped. Only the SS guards remained. On April 21, 1945, the Wehrmacht army report stated that heavy fighting was going on around the test grandstand of the Deutsche Stadion. In the final days of the war, the village of Achtel was almost totally destroyed because a handful of men were bitterly resisting the approaching Americans.

When the village was rebuilt after the war, timber from the test stadium was used as construction material. The inhabitants of Achtel removed the building that brought them destruction. As the years passed, nature started to reclaim the hillside.

When a Nuremberg history student arrived in Achtel to look for the grandstand in the 1980s, no one wanted to remember it — even though they still call it “Stadium Mountain.” At the time, the concrete pillars and massive walls that run up the hillside were completely overgrown and barely visible.

The relics have been uncovered since and were placed under monument protection in 2002. Pine trees stand between them but they still convey the megalomania behind this massive construction project.

In Nuremberg, the only reminder of the Deutsche Stadion is the so-called Silbersee lake — the former construction pit which has long since filled with water.