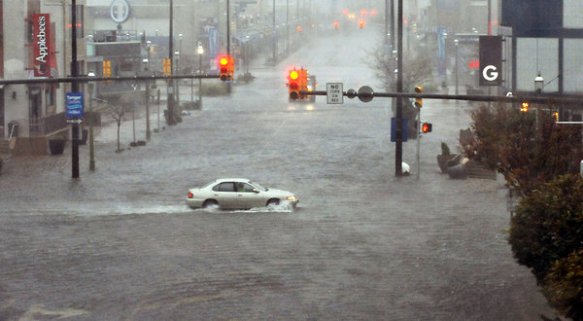 Hurricane Sandy battered the mid-Atlantic region on Monday, its powerful gusts and storm surges causing once-in-a-generation flooding in coastal communities, knocking down trees and power lines and leaving hundreds of thousands of people — including a large swath of Manhattan — in the rain-soaked dark.

The mammoth and merciless storm made landfall near Atlantic City around 8 p.m., with maximum sustained winds of about 80 miles per hour, the National Hurricane Center said. That was shortly after the center had reclassified the storm as a post-tropical cyclone, a scientific renaming that had no bearing on the powerful winds, driving rains and life-threatening storm surge expected to accompany its push onto land.

The storm had unexpectedly picked up speed as it roared over the Atlantic Ocean on a slate-gray day and went on to paralyze life for millions of people in more than a half-dozen states, with extensive evacuations that turned shorefront neighborhoods into ghost towns. Even the superintendent of the Statue of Liberty left to ride out the storm at his mother’s house in New Jersey; he said the statue itself was “high and dry,” but his house in the shadow of the torch was not.

The wind-driven rain lashed sea walls and protective barriers in places like Atlantic City, where the Boardwalk was damaged as water forced its way inland. Foam was spitting, and the sand gave in to the waves along the beach at Sandy Hook, N.J., at the entrance to New York Harbor. Water was thigh-high on the streets in Sea Bright, N.J., a three-mile sand-sliver of a town where the ocean joined the Shrewsbury River.

“It’s the worst I’ve seen,” said David Arnold, watching the storm from his longtime home in Long Branch, N.J. “The ocean is in the road, there are trees down everywhere. I’ve never seen it this bad.”

The police said a tree fell on a house in Queens shortly after 7 p.m., killing a 30-year-old man. In Manhattan a few hours earlier, a construction crane atop one of the tallest buildings in the city came loose and dangled 80 stories over West 57th Street, across the street from Carnegie Hall.

Soon power was going out and water was rushing in. Waves topped the sea wall in the financial district in Manhattan, sending cars floating downstream. West Street, along the western edge of Lower Manhattan, looked like a river. The Brooklyn-Battery Tunnel, known officially as the Hugh L. Carey Tunnel in memory of a former governor, flooded hours after Gov. Andrew M. Cuomo of New York ordered it closed to traffic.

“We could be fishing out our windows tomorrow,” said Garnett Wilcher, a barber who lives in the Hammells Houses, a block from the ocean in the Rockaways in Queens. Still, he said he felt safe at home. Pointing to neighboring apartment houses in the city-run housing project, he said, “We got these buildings for jetties.”

Businesses and schools were closed; roads, bridges and tunnels were closed; and more than 13,000 airline flights were canceled. Even the Erie Canal was shut down.

Subways were shut down from Boston to Washington, as were Amtrak and the commuter rail lines. About 1,000 flights were canceled at each of the three major airports in the New York City area. Philadelphia International Airport had 1,200 canceled flights, according to FlightAware, a data provider in Houston.

A replica of the H.M.S. Bounty, a tall ship built for the 1962 movie “Mutiny on the Bounty” starring Marlon Brando and used in the recent “Pirates of the Caribbean” series, sank off the North Carolina coast. The Coast Guard said the 180-foot three-masted ship went down near the Outer Banks after being battered by 18-foot-high seas and thrashed by 40-m.p.h. winds. The body of one crew member, Claudene Christian, 42, was recovered. Another crew member remained missing.

Delaware banned cars and trucks from state roadways for other than “essential personnel.”

“The most important thing right now is for people to use common sense,” Gov. Jack Markell said. “We didn’t want people out on the road going to work and not being able to get home again.”

By early evening, the storm knocked out power to hundreds of thousands of homes, stores and office buildings. Consolidated Edison said 68,700 customers had lost power — 21,800 in Westchester County, 18,500 on Staten Island and 18,200 in Queens. In New Jersey, the Public Service Electric and Gas Company said the storm had knocked out power to 36,000 customers. In Connecticut, nearly 70,000 people had lost electricity, utility officials reported. Con Edison, fearing damage to its electrical equipment, shut down power pre-emptively in sections of Lower Manhattan, and then, at 8:30 p.m., an unplanned failure knocked out power to most of Manhattan below Midtown, about 250,000 customers.

President Obama, who returned to the White House and met with top advisers, said the storm would disrupt the rhythms of daily life in the states it hit. “Transportation is going to be tied up for a long time,” he said, adding that besides flooding, there would probably be widespread power failures. He said utility companies had lined up crews to begin making repairs. But he cautioned that it could be slow going.

“The fact is, a lot of these emergency crews are not going to get into position to start restoring power until some of these winds die down,” the president said. He added, “That may take several days.”

Forecasters attributed the power of the storm to a convergence of weather systems. As the hurricane swirled north in the Atlantic and then pivoted toward land, a wintry storm was heading toward it from the west, and cold air was blowing south from the Arctic. The hurricane left more than 60 people dead in the Caribbean before it began crawling toward the Northeast.

“The days ahead are going to be very difficult, Gov. Martin O’Malley of Maryland said. “There will be people who die and are killed in this storm,” he said.

Alex Sosnowski, a senior meteorologist with AccuWeather, said potentially damaging winds would continue on Tuesday from Illinois to the Carolinas — and as far north as Maine — as the storm barreled toward the eastern Great Lakes.

Mr. Cuomo, who ordered many of the most heavily used bridges and tunnels in New York City closed, warned that the surge from Hurricane Sandy could go two feet higher than that associated with Tropical Storm Irene last year. The PATH system, buses and the Staten Island Ferry system were also suspended.

Joseph J. Lhota, the chairman and chief executive of the Metropolitan Transportation Authority, said he expected to restore at least some service about 12 hours after the storm ended. But he warned that the city could be without mass transit for as many as two workdays.

The storm headed toward land with weather that was episodic: a strong gust of wind one minute, then mist. More wind. Thin sheets of rain dancing down the street. Then, for a moment, nothing. The sky lightened. Then another blast of rain. Then more wind.

The day brought a giddiness to schoolchildren who had the day off and to grown-ups who were fascinated by the rough, rising water. Some went surfing, discounting the danger. Felquin Piedra, 38, rode his Jet Ski from Queens to Lower Manhattan.

“I love the waves,” Mr. Piedra yelled from New York Harbor. “The water is warm. I’ve jumped in several times.”

But even when landfall was still hours away, there was no holding back the advance guard of the storm — fast-moving bands of rain and punishing winds.

It added up to devastation. Driving through places like Pompton Plains, N.J., late Monday afternoon was like an X-Games contest for drivers. They had to do tree-limb slaloms on side streets and gunned their engines anxiously as they passed wind funnels of leaves swirling on highways.

On City Island, off the Bronx mainland, Cheryl Brinker sprayed “Sandy Stay Away” on her boarded-up art studio, expanding a collage she started during Tropical Storm Irene last year. But by midafternoon, nearby Ditmars Street was under as much as five feet of water and Steve Van Wickler said the water had cracked the cement in his cellar. “It’s like a little river running in my basement,” he said. “There are cracks and leaks everywhere.”

In some places, caravans of power-company trucks traveled largely empty roads; Public Service Electric and Gas said that 600 line workers and 526 tree workers had arrived from across the country, but could not start the repairs and cleanup until the wind had subsided, perhaps not until Wednesday.

They will see a landscape that, in many places, was remade by the storm. In Montauk, at the end of Long Island, a 50-seat restaurant broke in half. Half of the building floated away and broke into pieces on the beach.

The 110-foot-tall lighthouse at Montauk Point — the oldest in the state, opened in 1796 — shuddered in the storm despite walls that are six feet thick at the base. The lighthouse keeper, Marge Winski, said she had never felt anything like that in 26 years on the job.

“I went up in tower and it was vibrating, it was shaking,” she said. “I got out of it real quick. I’ve been here through hurricanes, and nor’easters, but nothing this bad.”