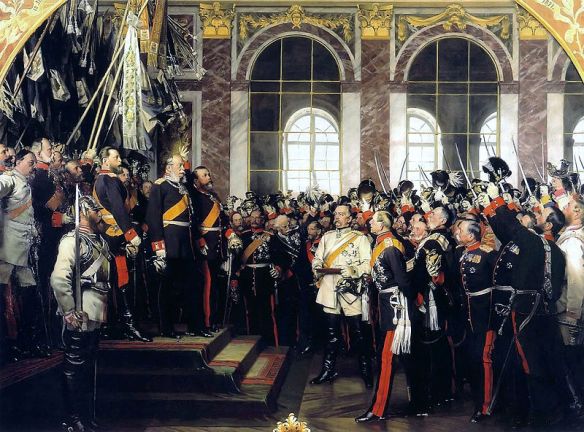 Kaiser Wilhelm I / Kaiser William I

William I, the first Kaiser, was born March 22, 1797, the second son of Frederick William III, at that time still Crown Prince of Prussia, and the noble Princess Louisa of Mecklenburg-Strelitz. His childhood fell in the saddest time of Germany, its subjection to the tyranny of Napoleon I. As a boy of sixteen he received his commission as captain and joined the headquarters of the allied monarchs at Frankfort-on-the-Main as aide-de-camp of his father. Later on he accompanied Bliicher’s army to France and was several times under fire.

During the time which followed, until he became Regent in 1857, Prince William devoted himself with all his heart to the military service. In October, 1858, he became permanent Regent and after the death of his brother in January, 1861, King of Prussia. As a soldier, William had seen the great defects of the Prussian army. He knew that the “Shame of Olmutz” would not have humiliated Prussia, if she had been a strong military power. To avoid the recurrence of such a diplomatic defeat and to prepare his country to meet any  enemy, William held the reorganization of the army to be the most necessary step in Prussian government. He emphatically pointed out its necessity in his speech at the opening of the Prussian Parliament. But the Liberal majority in the Lower Chamber, fearing that they might make the Crown too independent and lose control of it, persistently refused to vote for the expenditures made necessary by military reconstruction.

Three courses were open to the King: The first, to give up the reorganization, was impossible for him. He would sooner have abdicated. So he had either a coup d’etat to abolish the constitution or find a strong man, who would carry out his will in spite of the opposition of Parliament. Happily he found this man in Otto von Bismarck, who was appointed Minister-President in September, 1862, with Roon as Minister of War. In 1858, Helmut von Moltke had been made Chief of the General Staff of the army. These three men together with the King led Prussia to its victories in war and diplomacy, as a result of which the German Empire arose.

As a Prince, disliked, even hated by the masses, he was at the end of his life in 1888, beloved by his people as seldom a ruler has been. His kindness of heart, even towards the humblest servant, could not be excelled. He was a soldier from top to bottom, possessing all the virtues of that class: a high sense of duty, courage, exactness in the smallest details, activity. Like his great ancestor, Frederick II, he regarded himself as the first servant of his country. Significant are his words when asked at the end of his life to stop work for a while on account of his weakness: “I have not time to rest.”

Memorials to him are found all over Germany, usually flanked by statues of Bismarck and Moltke. Each of these three, the king, the statesman, and the general, was indispensable in building the new empire. Later, the old Emperor used to appear every day about one o’clock at the corner window of the old palace, when the guard marched by. People came in crowds to see him. When he became feeble his family tried to persuade him not to stand at the window, but he insisted with characteristic energy and wit : ” I must do it ; it says in Baedeker [a well-known guide book] that I am to be seen here.” He died March 9, in 1888, and was succeeded by his son, Kaiser Friedrich III [so called because he was King Friedrich III of Prussia, not because he was the third Emperor Friedrich.]

William I was not a genius. William I, a man of ordinary intelligence, had this rare merit, that he judged himself accurately. He knew that he was incapable of governing without strong and trusted advisers. He himself chose Roon and Moltke and Bismarck, and, having chosen them, he stood by them through thick and thin, subordinating his views or preferences, when necessary, to theirs. He was not jealous of the power they wielded or of their popularity – power and popularity based, as he well knew, upon achievements for the Fatherland and for the House of Hohenzollern.  The tremendous success of his reign without hesitation, must be attributed to his Chancellor Bismarck. Very little was done except on the initiative of the Chancellor and nothing of importance without his consent. Bismarck created the chancellorship to fit his own gigantic proportions. William I was King and Kaiser, but Bismarck governed.