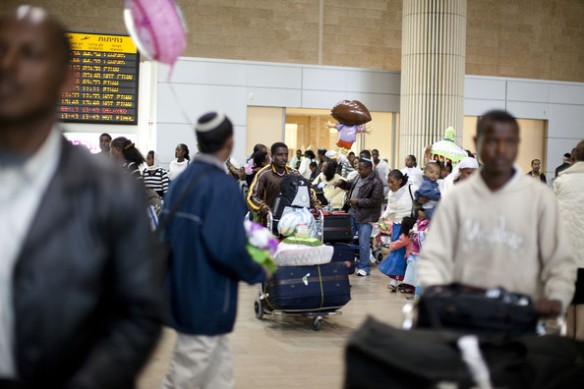 Israel’s anti-infiltration law is a disgrace

Any detention without trial is an extreme act that should be foreign to a law-abiding state, much more so when the victims are work migrants who harbor no ill intentions against the state.

Of all the antidemocratic laws that have descended on us of late, it is perhaps the most shameful. After a long, late-night session on Monday the Knesset plenum approved the second and third reading of an amendment to the Prevention of Infiltration Law. Only eight Knesset members voted against the amendment, while 37 supported it.

From now on, work seekers from Africa who enter Israel illegally can be imprisoned for three years, without the benefit of a trial and without any distinction between asylum seekers and labor migrants. Anyone who aids migrants who smuggle drugs or weapons, including by providing shelter, could also face a lengthy sentence. Even the courageous objections of Knesset legal advisor Eyal Yinon were to no avail, and the law was passed.

Words fail in the face of such a disgraceful act of legislation. Sending desperate human beings, who come to Israel to find gainful employment, to jail for an extended period is completely antidemocratic and inhuman. Any detention without trial is an extreme act that should be foreign to a law-abiding state, much more so when the victims are work migrants who harbor no ill intentions against the state. The fact that the original law from 1954 was aimed at the fedayeen and Palestinian refugees seeking to return to their homes, if only to salvage some of their belongings, after the 1948 War, only underscores its problematic nature. If during the state’s early years it was somehow possible to accept such a draconian law, in 2012, when those who cross the border illegally do not pose a genuine security threat, sending them to prison for such a long period is intolerable.

The problem of the labor migrants must be solved in other ways, certainly not through long incarceration without trial. Israel has the right to close its borders and set its own immigration policy, like the world’s most developed nations. But it does not have the right to imprison people – some of whom have been recognized as refugees, to whom no door should be closed and certainly not that of Israel. On Monday a jingoistic and unnecessary law that is unlikely to solve the problem for which it was intended was added to Israel’s legal code.