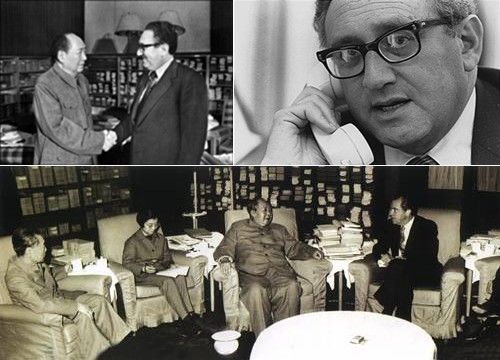 Henry Kissinger was not only the first official American emissary to Communist China, he persisted in his brokerage with more than 50 trips over four decades, spanning the careers of seven leaders on each side. Diplomatically speaking, he owns the franchise; and with “On China,” as he approaches 88, he reflects on his remarkable run.

To the degree that Washington and Beijing now understand each other, it is in good measure because Kissinger has been assiduously translating for both sides, discerning meaning in everything from elliptical jokes to temper tantrums. At every juncture, he has been striving to find “strategic concepts” that could be made to prevail over a history of conflict, mutual grievance and fear. As President Nixon’s national security adviser, then secretary of state for Nixon and Gerald Ford, and since 1977 as a private interlocutor extraordinaire, Kissinger has been unwaveringly committed to surmounting what he considers the legitimate Chinese resentment of American interference in their internal affairs and Americans’ distaste for China’s brutal suppression of ethnic, religious and political dissent.

The surprise buried in his lumbering review of Sino-American relations is that the much ballyhooed Nixon-Kissinger journeys to China in 1971-72 turned out to have been the easy part. “That China and the United States would find a way to come together was inevitable given the necessities of the time,” he writes. “It would have happened sooner or later whatever the leadership in either country.” Both nations were exhausted from war (Vietnam, clashes on the Soviet border) and domestic strife (antiwar protests in Nixon’s case, the Cultural Revolution in Mao’s). Both were determined to resist Soviet advances and so could quickly agree to make common cause. The menace of Moscow took the leaders’ minds off confrontations in Vietnam and Taiwan and quelled their ritual denunciations, whether of international imperialism or Communism. They decided that the adversary of my adversary was my pal, and for more than a decade that was fruitfully that.

But that was a different time. China finally escaped from Mao Zedong’s mad doctrine of perpetual revolution and from the enfeebling nostrums of central planning; it became an industrial powerhouse. The Soviet Union and its empire collapsed. And the United States, feeling supreme, began promoting democracy with missionary zeal even as it grew dangerously addicted to foreign oil, goods and credit. The radical shift in the balance of power turned China and the United States into mutually dependent economic giants, but it left them without an overarching strategic design of partnership.

It is to demonstrate the need for such a design that Kissinger reviews the ups and downs of Sino-American relations, reaching even into ancient Chinese history to define national characteristics. (He finds it apt that the Chinese like to play “wei qi,” or “go,” a protracted game of encirclement while we play chess, looking for control of the center and total victory.) Kissinger draws heavily on much recent scholarship and on notes of his trips to Beijing to celebrate the pragmatism of Mao’s successors. He says they are content to remain within their restored historic frontiers, willing to await a peaceful reunion with Taiwan, and most determined to continue their remarkable economic growth and to eradicate China’s still widespread poverty. He is less confident about America’s capacity to sustain a steady foreign policy, noting that “the perpetual psychodrama of democratic transitions” is a constant invitation to other nations to “hedge their bets” on us.

As students of Kissinger well know, he has long considered democracy to be a burden on statecraft — both the clamor of democracy within the United States and our agitations for democracy in other lands.

He recalls yet again his agonies in office in the 1970s, when he thought that American demonstrations during the Vietnam War could have misled Mao into believing that a “genuine world revolution” was at hand. He argues that the “destruction” of Nixon in the Watergate crisis, the withdrawal of Congressional support for Vietnam, new curbs on presidential war powers and the “hemorrhaging” of intelligence secrets all combined to undermine the quasi alliance with China, making America appear ineffectual against the Soviets. He is glad that Jimmy Carter did not let his human rights concerns upset relations with China and that Ronald Reagan’s cheerful personality overcame the “almost incomprehensible contradictions” of his dealings with Beijing even as he promoted the idea of an independent Taiwan.

The severest test of the quasi alliance, of course, was the brutal suppression of democratic strivings in Tiananmen Square in 1989. That violent crackdown also tested Kissinger’s tolerance for the assertion of American values in foreign relations.

Looking back, he believes everything depends on circumstances: “There are instances of violations of human rights so egregious,” he writes, “that it is impossible to conceive of benefit in a continuing relationship; for example, the Khmer Rouge in Cambodia, and the genocide in Rwanda. Since public pressure shades either into regime change or a kind of abdication, it is difficult to apply to countries with which a continuous relationship is important for American security. This is especially the case with China, so imbued with the memory of humiliating intervention by Western societies.”

And so Kissinger admires the way President George H. W. Bush, “with skill and elegance,” walked the “tightrope” of punishing China with sanctions after Tiananmen while simultaneously apologizing with private letters and special emissaries. President Bill Clinton tried applying pressure for a time, Kissinger notes, but was shown no gratitude when he wisely relented; the Chinese “did not view the removal of a unilateral threat as a concession, and they were extraordinarily touchy regarding any hint of intervention in their domestic affairs.” And President George W. Bush, despite his “freedom agenda,” earns Kissinger’s praise for overcoming “the historic ambivalence between America’s missionary and pragmatic approaches,” by means of “a sensible balance of strategic priorities.”

If America’s preference for democratic governance is made the main condition for progress on other issues with China, Kissinger concludes, “deadlock is inevitable.” Those who battle to spread American values deserve respect. “But foreign policy must define means as well as objectives, and if the means employed grow beyond the tolerance of the international framework or of a relationship considered essential for national security, a choice must be made.” That choice “cannot be fudged,” he insists, even as he attempts to protect his flanks with a fudge of his own: “The best outcome in the American debate would be to combine the two approaches: for the idealists to recognize that principles need to be implemented over time and hence must be occasionally adjusted to circumstance; and for the ‘realists’ to accept that values have their own reality and must be built into operational policies.”

Still, in the end, Kissinger votes for national security über alles. Scattered through his history are tributes to American values and commitments to human dignity, which may indeed sometimes drive our policies beyond calculations of the national interest. Exactly that happened, in fact, after “On China” went to press, when President Obama ventured into Libya. Kissinger was perhaps surprised when that humanitarian intervention and bid for regime change failed to evoke a Chinese veto at the United Nations. But in Asia now more than Europe, he argues, “sovereignty is considered paramount,” and any attempt “from the outside” to alter China’s domestic structure “is likely to involve vast unintended consequences.” Besides, as he used to insist while practicing realpolitik in Washington, the cause of peace is also a moral pursuit.

This central theme of Kissinger’s experience and counsel must be distilled from the sometimes ­meandering and largely familiar history he tells in “On China.” Only in its last pages does he discuss the essential question of future Sino-American relations: With no common enemy to bind them, what will keep the peace and promote collaboration and trust between the world’s major ­powers?

Kissinger addresses this question by looking to the past, a memorandum written by a senior official of the British Foreign Office, Eyre Crowe, in 1907. Crowe argued that it was in Germany’s interest to “build as powerful a navy as she can afford” and that this would itself lead to “objective” conflict with the British Empire, no matter what German diplomats said or did. There is today a “Crowe school of thought” in the United States, Kissinger observes, which sees China’s rise “as incompatible with America’s position in the Pacific” and therefore best met with pre-emptively hostile policies. He perceives growing anxieties in both societies and fears they are exacerbated by Americans who claim that democracy in China is a prerequisite for a trusting relationship. He warns that the implied next cold war would arrest progress in both nations and cause them to “analyze themselves into self-fulfilling prophecies” when in reality their main competition is more likely to be economic than military.

Indulging his habitual preference for diplomatic architecture, Kissinger insists that the common interests the two powers share should make possible a “co-evolution” to “a more comprehensive ­framework.” He envisions wise leaders creating a “Pacific community” comparable to the Atlantic community that America has achieved with Europe. All Asian nations would then participate in a system perceived as a joint endeavor rather than a contest of rival Chinese and American blocs. And leaders on both Pacific coasts would be obliged to “establish a tradition of consultation and mutual respect,” making a shared world order “an expression of parallel national aspirations.”

That was indeed the mission of the very first Kissinger journey to Beijing. And while he does not quite say so, he invests his hopes in a concert of nations represented, of course, by multiple Kissingers.

Max Frankel, a former executive editor of The Times, covered the Nixon-Kissinger journey to China in 1972.

This article has been revised to reflect the following correction:

A picture caption on May 15 with a review of Henry Kissinger’s “On China” misidentified an American official shown at a meeting with Kissinger, President Richard M. Nixon and Prime Minister Zhou Enlai during Nixon’s trip to China in 1972. He was John H. Holdridge, a senior staff member of the National Security Council, not Secretary of State William P. Rogers, who also went on the trip.