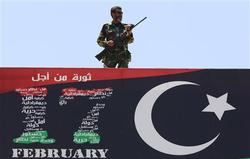 BIR-AYYAD, Libya (Reuters) – Libyan rebels who had advanced to within 80 km (50 miles) of Muammar Gaddafi’s stronghold in the capital were forced to retreat on Friday after coming under a barrage of rocket fire from government forces.

Rebel fighters who had been massing on a ridge near Bir al-Ghanam and preparing for an attack were now pulling back under fire from Russian-made Grad rockets, said a Reuters photographer in Bir-Ayyad, 30 km to the south.

He said the rocket barrage was now reaching as far back as Bir-Ayyad, a road junction in the foothills of the Western Mountains range south-west of Tripoli from where the rebels had launched their advance last week.

The reversal underlines the resilience of Gaddafi’s forces, who have withstood 15 weeks of bombardment by NATO missiles and warplanes, and attempts by rebels on three fronts to break through their lines.

In an audio address carried by Libyan television and broadcast to tens of thousands of supporters who gathered on Friday in Tripoli’s Green Square, Gaddafi vowed to stay on and warned NATO to stop its air war or face defeat.

“We advise you (NATO) to retreat before you face a catastrophe,” Gaddafi told the crowd of supporters who waved green flags and posters of the Libyan leader.

“I advise you to ground your planes … and to hold discussions with the Libyan people,” Gaddafi said, denouncing arrest warrants for him, his son and his brother-in-law issued on Monday by the International Criminal Court.

Guns were fired into the air at the end of the speech.

Two hours after the speech, three explosions were heard and columns of black smoke were seen rising from the direction of Gaddafi’s central Bab Al Aziziya compound in what appeared to be NATO air strikes.

Frustration at the slow progress is growing inside the military alliance, with some members worried about the cost, civilian casualties and the fact the campaign has now been going on much longer than its backers anticipated.

There are also differences about how proactive NATO members should be in aiding the rebels, who are hampered by a lack of organization and a shortage of equipment.

France this week became the first member of the anti-Gaddafi alliance to acknowledge that it had supplied weapons to the rebels, saying this was justified to protect civilians.

It said it used parachutes to drop assault rifles and rocket launchers, along with humanitarian supplies, to rebels in the Western Mountains.

That admission prompted Russia, a permanent member of the United Nations Security Council, to accuse France of a “gross violation” of a U.N. arms embargo.

Even France’s NATO allies distanced themselves from the French operation, though Britain and the United States said they believed it was justified under U.N. rules.

Libyan state television reported that NATO had bombed military and civilian sites in the government-controlled town of Garyan, on the eastern edge of the Western Mountains.

NATO said it had successfully destroyed a military target in the town on Friday.

“It should be noted that the target was well outside the built-up area of the conurbation and no collateral damage was observed afterwards. At no time was any civilian area targeted,” a NATO official said.

Gaddafi has said the NATO campaign is an act of colonial aggression aimed at stealing Libya’s plentiful oil.

Gaddafi’s daughter, Aisha, said in a television interview broadcast late on Thursday her father’s administration was prepared to cut a deal with the rebels if that was what it took to stop the bloodshed.

“There are direct and indirect negotiations and we should stop letting Libyan blood,” Gaddafi’s daughter said in an interview with France 2 television.

“And for that we are ready to ally with the devil and that is the armed rebels,” said Aisha Gaddafi, a lawyer who has no official government role but has often acted as a mediator on behalf of her family.

Although the offer marked a shift in tone, Gaddafi again dismissed the rebels as “traitors, a fifth column and mercenaries” in his telephone address on Friday.

The London-based Asharq al-Awsat newspaper reported Gaddafi’s representatives had been meeting officials from France and Britain on the Tunisian island of Djerba.

Citing unnamed sources from the Gaddafi and opposition camps, the newspaper said Gaddafi was willing to step down if he was spared prosecution and allowed to live in his hometown of Sirte, northern Libya, with guarantees for his security.

There was no confirmation of the report from Gaddafi’s government, Britain or France.

Anti-Gaddafi rebels rejected talks with the Libyan leader’s regime after the ICC issued its arrest warrants, saying there was no point talking to a war criminal.

Some Libya-watchers say Gaddafi has floated the possibility of a peace deal several times to stall for time and weaken the resolve of the Western alliance to push him out.

But others say he may be looking for a negotiated exit as his options narrow. International sanctions are causing a shortage of fuel in Gaddafi-controlled areas, and NATO strikes are eroding his ability to enforce his power.

The Libyan conflict has sent ripples far beyond the North African country of six million people.

The fighting has halted Libyan oil exports, helping push up world crude prices to about $111 a barrel.

It has also created a security vacuum which officials in the region say could be exploited by Islamist militants and al Qaeda’s North African wing.

“If this civil war goes on, it would be a new Somalia, which I don’t say lightly. In three months we could be dealing with extremists,” Marouane Abassi, World Bank country manager for Libya, told Reuters in the Tunisian capital.