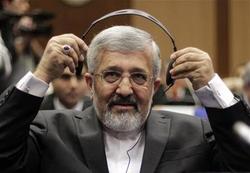 WASHINGTON/BRUSSELS (Reuters) – President Barack Obama said an announcement on Tuesday of six-power talks with Iran offered a diplomatic chance to defuse a crisis over its nuclear program and quiet the “drums of war.”

EU foreign policy chief Catherine Ashton, who represents the United States, Russia, China, France, Britain and Germany in dealings with Iran, announced a fresh bid to allay suspicions that Iran is developing nuclear weapons after weeks of consultations with the other powers.

A date and venue have yet to be agreed for the talks, proposed by Iran after a year’s diplomatic standstill that has increased fears of a slide into a new Middle East war.

Amid mounting speculation that Iran’s nuclear sites could be attacked in coming months, Obama said that American politicians “beating the drums of war” had a responsibility to explain the costs and benefits of military action.

He said the notion that the United States needed to make a choice in coming weeks or months was “not borne out by facts.”

But he said Washington would “not countenance” Iran getting a nuclear weapon, shortly after Defense Secretary Leon Panetta said the United States would take military action to prevent this happening if diplomacy failed.

With Israel speaking increasingly loudly of resorting to military action, the talks could provide some respite in a crisis that has driven up oil prices and threatened to suck the United States into its third major war in a decade.

“Today I have replied to Dr Jalili’s letter of February 14,” Ashton, speaking on behalf of the six powers after weeks of consultations with them, said in a statement. “I have offered to

resume talks with Iran on the nuclear issue.”

A senior EU official said these talks were not expected before the Iranian New Year in two weeks, though there would be a series of preparatory meetings, possibly in the coming days.

“Our overall goal remains a comprehensive, negotiated, long-term solution which restores international confidence in the exclusively peaceful nature of Iran’s nuclear program, while respecting Iran’s right to the peaceful use of nuclear energy,” Ashton said in her reply to Jalili.

Western states are likely to tread cautiously, mindful of past accusations that Iran’s willingness to talk has been a stalling tactic to blunt pressure and not a route to agreement.

The Islamic Republic’s latest approach to the six powers comes at a time when it is suffering unprecedented economic pain from expanding oil and financial sanctions.

The resumption of talks could slow a drift towards military strikes on a uranium enrichment program that Iran is gradually moving underground in what the West fears is an attempt to put a weapons program beyond reach. Iran says its research is aimed purely at electricity generation.

Israel, which says its existence will be threatened if Iran develops nuclear armaments, is losing confidence in Western efforts to rein in the Islamic Republic with sanctions and diplomatic pressure.

Israeli Prime Minister Benjamin Netanyahu assured Obama on Monday that the Jewish state had made no decision on attacking Iranian nuclear sites, sources close to talks in Washington said. But he gave no sign of backing away from the option of military strikes.

The new prospect of diplomacy contributed to a fall in oil prices on Tuesday, with Brent crude falling $1.82 to just under $122.

The senior EU official said there were reasons to believe talks with Iran might be productive.

“The first is that there is clear written commitment by Iran to be willing to address the nuclear issue in talks,” the official said. “Second is the unity of the international community … Third is certainly sanctions.”

Russia, which built Iran’s first nuclear power plant and has far warmer relations with Tehran than Western nations do, has often stressed the need for talks and said coercive pressure on Tehran is counterproductive.

Russian Deputy Foreign Minister Sergei Ryabkov said last month that global powers must work harder to seek agreement with Iran, warning that Tehran’s appetite for concessions was waning as it moves closer to being able to build atomic weapons.

On Tuesday, Ryabkov said he hoped fresh talks with Iran would address a proposal by president-elect Vladimir Putin for global powers to formally recognize Iran’s right to enrich uranium, Tehran to submit its program to full IAEA supervision, and international sanctions to be lifted.

Iran said on Tuesday it would let U.N. nuclear inspectors visit a military site where they have been repeatedly refused access, to check intelligence suggesting that explosives tests relevant to atom bombs have been conducted there.

However, diplomats noted a proviso in the Iranian statement saying that access to the Parchin site still hinged on a broader agreement on how to settle outstanding issues, which the two sides have been unable to reach for five years.

An International Atomic Energy Agency report in November said that Iran had built a large containment chamber at Parchin, southeast of Tehran, to conduct high-explosives experiments that are “strong indicators” of an effort to design atomic bombs.

Israel has mooted pre-emptive bombings against Iran, a hawkish approach that Obama – wary of the risk of igniting a new Middle East war and a global surge in oil prices as he seeks re-election in November – has tried to restrain to give time for harsher sanctions and diplomatic pressure to bear fruit.

Israel insists that military action against Iran would be warranted to prevent it from attaining the capability to make nuclear weapons, as opposed to when it actually builds a device. Washington has not embraced that idea.

“The pressure (on Iran) is growing but time is growing short,” Netanyahu was quoted by aides as telling Obama.

Later, addressing the influential pro-Israel lobby AIPAC, Netanyahu said: “None of us can afford to wait much longer. As prime minister of Israel, I will never let my people live in the shadow of annihilation.”

U.S. officials say that, while Iran may be maneuvering to keep its options open, there is no clear intelligence that it has made a final decision to “break out” with a nuclear warhead.