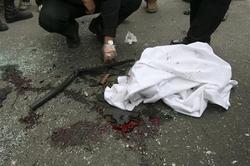 The bombing, which Iranian officials said bore all the hallmarks of assassinations of other nuclear scientists in the past years, came as Washington sought to persuade a skeptical China to help efforts to toughen sanctions against Iran.

Iran has blamed Israeli, British and U.S. intelligence for the attacks in the past, which it said were aimed at assassinating key people working on Iran’s nuclear program. Both Israel and the United States have rejected the claims.

“The bomb was a magnetic one and the same as the ones previously used for the assassination of the scientists, and is the work of the Zionists,” Tehran Deputy Governor Safarali Baratlou told the semi-official Fars news agency, referring to Israel.

Heightened tensions over the nuclear program, which major oil producer Iran insists is purely for civilian use but Western powers suspect has military goals, have driven oil prices higher, with Brent crude up more than 5 percent since the start of the year to above $113 a barrel.

The European Union has brought forward to January 23 a ministerial meeting that is likely to confirm an embargo on oil purchases, and big importers of Iranian oil are moving to secure alternative supplies.

Iran is the Organization of the Petroleum Exporting Countries’ (OPEC) second biggest exporter.

The victim was a nuclear scientist who “supervised a department at Natanz uranium enrichment facility,” Fars said.

Iran’s Atomic Energy Organisation confirmed in a statement that chemistry engineer Mostafa Ahmadi-roshan was part of Iran’s nuclear enrichment program and vowed not to be deflected from its development of nuclear technology:

“America and Israel’s heinous act will not change the course of the Iranian nation,” it said.

Witnesses told Reuters they had seen two people on the motorcycle fix the bomb to the car. As well as the person killed in the car, a pedestrian was also killed. Another person in the car was gravely injured, they said.

Other Iranian media also reported the death but there were differing accounts of the killing.

Two daylight bomb attacks on the same day in Tehran in November 2010 killed one nuclear scientist and wounded another. Physics lecturer Masoud Ali Mohammadi was killed in January 2010, when a remote-controlled bomb attached to a motorcycle exploded near his car in Tehran.

There was no immediate claim of responsibility for Wednesday’s attack.

“It is not our practice to comment on this sort of speculation,” an Israeli official, when asked about Tehran’s accusation over Wednesday’s killing.

On Tuesday, Israel’s military chief of staff, Lieutenant-General Benny Gantz, was quoted as saying that Iran should expect more “unnatural” events in 2012.

His comments, to a closed-door parliamentary panel in Jerusalem, were widely interpreted as alluding to previous acts of sabotage.

“For Iran, 2012 is a critical year in combining the continuation of its nuclearization, internal changes in the Iranian leadership, continuing and growing pressure from the international community and things which take place in an unnatural manner,” Gantz was quoted as saying.

Despite public infighting within the Iranian ruling establishment, Supreme Leader Ayatollah Ali Khamenei said on Monday that Iran had no intention of changing its nuclear course because of tightened foreign sanctions.

New U.S. sanctions against Iran have started to bite. The rial currency lost 20 percent of its value against the dollar in the past week and Iran has threatened to shut the Strait of Hormuz, through which 35 percent of seaborne traded oil passes.

“This step once again demonstrates the Iranian regime’s blatant disregard for its responsibilities and that the country’s growing isolation is self-inflicted,” Clinton said in a statement after Iran’s announcement it had started enrichment in the Fordow mountain bunker complex.

Iran’s decision to carry out enrichment work deep underground at Fordow could make it much harder for U.S. or Israeli forces to carry out veiled threats to use force against Iranian nuclear facilities. The move to Fordow could narrow a time window for diplomacy to avert any attack.

“It’s impossible to say who is behind the apparently carefully targeted attacks on Iranian nuclear scientists over the past couple of years. But Iranian perceptions will be that Israel, the U.S. and other Western states are behind the attacks, seeking as they are to sabotage the Iranian nuclear program,” said Gala Riani at IHS Global Insight.

“It’s hard to say whether it (Wednesday’s attack) could be in response to anything really, if it is being carried out by foreign intelligence services then its more likely to be part of a longer-term agenda to derail and set back Iran’s nuclear program … rather than a quick-reaction to the start of enrichment activities in Fordow,” Riani added.

Stepping up pressure on Tehran, U.S. President Barack Obama approved a law on New Year’s Eve that will sanction financial institutions dealing with Iran’s central bank, a move that makes it difficult for consumers to pay for Iranian oil.

Geithner is in Asia this week to drum up support for Washington’s efforts to stem the oil revenues flowing to Tehran, and made his first stop in China, Iran’s biggest customer.

China has backed U.N. Security Council resolutions calling on Iran to halt uranium enrichment activities, while working to ensure its energy supplies are not threatened. As a permanent member of the council, China wields a veto.

It has said the United States and European Union should not impose sanctions beyond the U.N. resolutions.

Geithner is likely to face an easier task in U.S. ally Japan, the next stop of his tour on Thursday, where a government source has said Tokyo will consider cutting back its Iranian oil purchases to secure a waiver from new U.S. sanctions.

Nuclear talks between Iran and the five permanent U.N. Security Council members plus Germany collapsed a year ago over Iran’s refusal to negotiate over its right to enrich uranium.

The United States and Israel say they are leaving the military option on the table in case it becomes the only way to prevent Iran from making a nuclear weapon.