Lingerie shops open another door for Saudi women at work 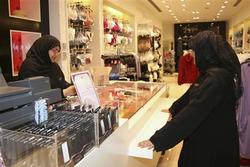 RIYADH (Reuters) – For customers of the La Senza lingerie shop at one of Riyadh’s glitziest malls, the introduction of women-only sales teams this week ended years of embarrassment.

No longer will female clients have to endure male shop assistants trying to size them up for underwear by sight through their voluminous, Islamically-approved robes.

For the women who stand behind the till, King Abdullah’s order last year to make lingerie shops an exclusively female domain also marks a more profound social shift: a step forward for female employment.

“I feel happy and independent. I no longer need anyone to support me financially, plus the job itself makes me strong,” said Amani, a young woman wearing a face-covering veil who was serving customers at La Senza.

Women account for only 7 percent of Saudis employed by private companies but make up almost half of all Saudis listed as looking for work, according to 2009 government figures.

In this conservative Islamic kingdom, where gender segregation is strictly enforced, paid employment has traditionally been seen as an all-male preserve. The fact that even lingerie shops were mostly staffed by men until this week had for years been seen by many Saudi women as an absurdity.

By denouncing all forms of female employment as opening the door to immoral interaction between the sexes, clerics and their enforcers, the religious police, in this case ended up forcing women to reveal intimate details of their body shape to men they did not know.

“It is very comfortable now. The shop is full of women and one can move freely and ask about anything without feeling embarrassed,” said Heba, a La Senza customer.

In a country where women are banned from driving and need the permission of a close male relative to work, travel and even have certain kinds of surgery, female employment is another battleground between traditionalists and those who want change.

While the ruling al-Saud family has always had a close relationship with the influential and deeply conservative Wahhabi clerics, the government has cautiously pushed for reforms that give women more rights.

“Ninety-nine percent of the society around me are accepting the situation,” said Amani.

“My family supports me a lot. They tell me to do whatever you like as it is your life,” she said, nevertheless declining to give her surname to avoid causing her family embarrassment.

The clerical establishment remains unmoved, however. The Grand Mufti, the kingdom’s highest religious official, said in a recent sermon in Riyadh that allowing women to work in shops was a crime that violates Islamic laws.

Saudi political watchers say King Abdullah has tried to push cautious change, but powerful conservatives have pushed him toward the middle ground.

While he disappointed women’s rights activists last year by not granting women the right to drive, he said women could vote and run in future municipal council elections and serve in the appointed Shura Council that advises the monarchy.

“I think that 2012 will be an extension of government efforts (to empower women) and even scaling up and building on those efforts,” Princess Amirah al-Taweel, wife of Saudi billionaire Prince Alwaleed bin Talal, told Reuters in December.

Social opposition is far from the only obstacle in the way of Saudi women who want to work.

Not only do they need the permission of a father, elder brother or husband, but given the ban on women driving and lack of good public transport they need to hire a driver or rely on a male relative who can drop them off.

For employers the situation is just as difficult. They have to conform to strict segregation requirements that ensure unmarried men and women will not be placed in the sort of unchaperoned proximity that could incur the wrath of the religious police.

That need for segregated facilities helps explain the huge disparity between the 56,000 Saudi women working for private companies and the 295,000 in government posts: girls’ schools and other all-female environments make it much easier to obey the rules.

But for all the difficulties, private companies want to employ Saudi women, who are perceived by some as particularly keen to work hard, said Khaled al-Khudair, the founder of a women’s online employment agency that started up last year.

His company, Glowork, advertises nearly 2,000 jobs pitched specifically at Saudi women. He said 7,500 female job applicants have signed up for his site.

More women than men graduated from higher education institutions last year, but the labor market has so far failed to catch up.

Jarmo Kotilaine, chief economist of National Commercial Bank in Jeddah, said Western countries went through a similar process in the 1960s, before which time educated women frequently did not expect to parlay their degrees into careers.

“Later the economic necessities changed this,” he said.

But overall change is slow.

“My family does not accept the idea that I work in a shop at all,” said Sarah, a sales clerk in another Riyadh lingerie store.

“My husband supports me, but on condition that this would be a temporary move till I find a better job in an all-female environment, like a school,” she said.