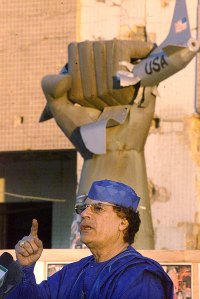 By Maria Golovnina and Michael Georgy

“All of us must continue to increase the pressure on and deepen the isolation of the Gaddafi regime through other means as well,” Clinton said after the London talks finished.

“This includes a unified front of political and diplomatic pressure that makes clear to Gaddafi that he must go,” she said.

The United States is scaling back to a “supporting role” to let NATO take full command from U.S. forces on Wednesday, but air strikes by U.S., French and British planes remain key to smashing Gaddafi’s armor and facilitating rebel advances.

It took five days of allied air strikes to pulverize Libyan government tanks around the town of Ajdabiyah before Gaddafi’s troops fled and the rebels rushed in and began their 300-km (200-mile), two-day dash across the desert to within 80 km (50 miles) of the Gaddafi loyalist stronghold of Sirte.

But the rebel pick-up truck cavalcade was first ambushed, then outflanked by Gaddafi troops. The advance stopped and government forces retook the small town of Nawfaliyah, 120 km (75 miles) east of Sirte.

“The Gaddafi guys hit us with Grads (rockets) and they came round our flanks,” Ashraf Mohammed, a 28-year-old rebel wearing a bandolier of bullets, told a Reuters reporter at the front.

The sporadic thud of heavy weapons could be heard as dozens of civilian cars sped eastwards away from the fight.

Later, a hail of machinegun and rocket fire hit rebel positions. As the onslaught began, rebels leapt behind sand dunes to fire back. After a few minutes they gave up, jumped into their pick-up trucks and sped off back toward the town of Bin Jawad. Shells landed near the road as they retreated.

A rebel spokeswoman in the main rebel stronghold of Benghazi said that the front line was now just west of Bin Jawad, 25 km (15 miles) east of Nawfaliyah.

REBELS ON THE RUN

Without air strikes it appears the rebels are not able to make advances or even hold ground.

Reports that some Nawfaliyah residents had fought alongside government troops are an ominous sign for world powers hoping for a swift end to Gaddafi’s rule.

Britain said the international partners meeting in London agreed to continue their military mission until Gaddafi complied with all terms of a U.N. resolution to protect civilians.

They also agreed to set up a contact group, including Arab states, to give political guidance for the response to the war and coordinate long-term support to Libya. The Gulf Arab state of Qatar agreed to convene a first meeting as soon as possible.

Gaddafi accused Western powers of massacres of Libyan civilians in alliance with rebels he said were al Qaeda members.

“Stop your brutal and unjust attack on our country … Hundreds of Libyans are being killed because of this bombardment. Massacres are being mercilessly committed against the Libyan people,” he said in a letter to world leaders.

“We are a people united behind the leadership of the revolution, facing the terrorism of al Qaeda on the one hand and on the other hand terrorism by NATO, which now directly supports al Qaeda,” Libya’s official news agency quoted him as saying.

The rebels deny any al Qaeda links and on Tuesday promised free and fair elections if Gaddafi is forced from power.

Admiral James Stavridis, head of U.S. European Command, told the U.S. Senate there was no indication of any “significant al Qaeda presence or any other terrorist presence.”

Both Britain and Italy suggested Gaddafi might be allowed to go into exile to bring a quick end to the six-week civil war, but the U.S. ambassador to the United Nations Susan Rice said there was no evidence the Libyan leader was prepared to leave.

Clinton said coalition military strikes would continue until Gaddafi fully complies with U.N. demands to cease violence against civilians and pull forces out of occupied cities.

“All of us must continue to increase the pressure on and deepen the isolation of the Gaddafi regime through other means as well,” Clinton told the London conference.

“This includes a unified front of political and diplomatic pressure that makes clear to Gaddafi that he must go.”

“To be blunt, we went down that road in Iraq,” Obama said in a televised address before the conference.

British Foreign Secretary William Hague said the London conference had not discussed arming the rebels, but U.S. officials were not ruling it out, believing it to be permitted by U.N. Security Council Resolution 1973 calling for the protection of Libyan civilians from Gaddafi’s forces.

“We have not made that decision, but we’ve not certainly ruled that out,” Rice told CBS’s “The Early Show.” An Italian diplomatic source said it would require a new U.N. resolution.

Rice said the United States would maintain financial and diplomatic pressure on Libya until Gaddafi leaves.

In western Libya, rebels and forces loyal to Gaddafi both claimed control over parts of Misrata, Libya’s third city which has been besieged by government forces for more than a month.

Libyan state television said thousands of people were taking part in a march in support of Gaddafi in Misrata, which it said had been “cleansed of armed terrorist gangs.” It was the third time the channel said Misrata had been recaptured from rebels.

Government troops “tried an hour ago to get into the town through the eastern gate. The youths are trying to push them back. Fighting is still taking place now. Random bombardment is continuing,” the spokesman, called Sami, told Reuters by telephone from the city. “Eight civilians were killed and several others wounded last night.”

“The humanitarian situation is catastrophic. There is a shortage of food and medicine. The hospital is no longer able to deal with the situation,” the rebel spokesman said.

“We call for urgent help to protect civilians and improve the humanitarian situation.”