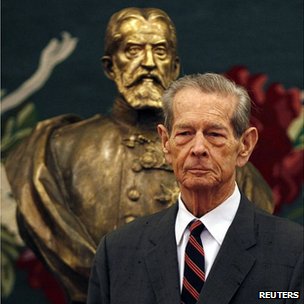 Romania: The discreet tonic of monarchy

Newspapers in Romania have reported that Prince Nicholas, grandson of King Michael, will move his residency from England to Romania. His return may well show that people’s appetite for monarchy has never been lost, says Ovidiu Nahoi.

Ovidiu Nahoi is a Romanian political analyst and journalist. He is also a talk show host for the Money Channel.

King Michael, 91, is the last head of state from the Second World War still alive. Nicholas, 27, son of Princess Elena – the king’s second daughter – has so far lived in London and first visited Romania 20 years ago. This was because only 20 years ago, the former sovereign was finally allowed to visit the country, for a few days, during the Easter holidays.

It is estimated that on that occasion, about one million people took to the streets to cheer the king, who appeared in public with his nephew. But the royal family had to wait almost a decade since then to be allowed to establish their residency in the country.

From a constitutional point of view, Romania is a republic. But in the Republic of Romania there is a king, as well as a royal family and a Royal House. The king spends time in between Aubonne, a small Swiss village on Lake Léman, and Săvârşin Castle, in Western Romania  – a castle the royal family bought in 1943.

The Romanian Royal House family also enjoys the privacy of Elisabeta Palace, a beautiful property located in the green area north of Bucharest. There, on the first floor, King Michael was forced to abdicate on 30 December 1947, as he was blackmailed by Communists who threatened to kill the few hundreds of students they had arrested during the protests if he had not complied.

The government gave the palace back to the family to use as their royal residence in 2001, as enshrined in the law on the rights of former heads of state. Finally, the royal family of Romania received back the wonderful Peles Castle, built by King Carol I in the Carpathians, in the late 19th century.

But the Romanian royal family interests are far from just patrimonial propriety. The Royal House has engaged in intense activity at both civic and political level.

Still, so far, the Royal House has only take baby steps, preferring to stay, as a full-fledged institution, discreet and away from today’s noisy political confrontations.

The activities of the royal family generally include visits abroad and hosting royal families visiting Bucharest. But between 2001 and 2007, King Michael and his family members toured  many countries to promote Romania’s accession to NATO and the European Union.

At home, the royals hold conferences, meet representatives of the local government or from business persons, artists and athletes. They hand out medals, orders, and give their royal support to cultural projects.

But then, one must mention the “Suppliers of the Royal House” – a number of people, designers, companies and shop which supply the royal family with products and services. In exchange, the royal family ‘promotes’ them.

From time to time, the king states his position on the internal social and political situation of Romania – the last time this happened was during the anti-government and anti-president protests in January 2012.

“Romanians have lost their trust. They are today asking politicians to engage in a a public behaviour that breaks from bad past habits completely and definitively. The entire royal family is with the souls of all those who in these times need encouragement and solidarity,” the King said in a message.

Meanwhile, the royal family in Bucharest are sorting out their future. In 2007, exactly 60 years after the abdication, the king, who has daughters but no direct male descendants, signed a decree to abolish the salic law, therefore allowing women the right to accession.

And in 2010, Michael announced the breakup with all remaining relationships he might have with the House of Hohenzollern, to which he traditionally belonged. This way, access to the “throne” is allowed only descendants of King Michael.

The return of Nicholas

Nicholas is in the line of succession, after the King’s daughters. However, his return might change this order of things, especially because Romania has always been dominated by political machismo.

So far, the only male figure of the family except, of course, the king, was represented by the husband of his eldest daughter, Princess Margaret – a Romanian actor who now plays a completely different role, but who is not popular amongst all the monarchy’s fans.

Are all these efforts discrete preparations for a bright future of the Royal House of Romania? Or, in a republic, are they just part of the royal coquetry?

Opinion polls show that despite the existence of a compact group of monarchy enthusiasts, most Romanians would vote in favour of the republic. However, Republican leaders themselves seem to be working, albeit not consciously, in the interests of monarchy.

Recent years have brought a sharp drop in the public confidence of the institutions of the democratic state, with sinking support for the parliament, president and political parties.

Meanwhile, according to a barometer of opinion published at the end of last year, King Michael ranked first in public confidence. This was happening in 2011, at the same time with the king’s 90th birthday. What is more, on this occasion, an initiative group managed to convince the Romanian Parliament to invite the former sovereign to make a speech on its premises, during a plenary.

The moment of the speech produced a strong wave of emotion amongst the members of society and propelled King Michael to centre stage, at a time of extreme dissatisfaction with the political, social and economic development of the country.

In a country where politicians stand out most often because of their extravagant behaviour and for being involved in public scandals, the king, with his serious face and a look that bares the marks of its historical burden, is seen, more  and more, as a factor of equilibrium and good model that the Romanian society needs.

The idea of restoring the monarchy, a concern which has not for one moment left the busy minds and activities of the Romanian intellectual elite, received a new impetus on the occasion of the Jubilee. It was immediately followed in January, when the King spoke amidst the protests tearing up the capital.

Prince Nicholas’ tonic figure may be a step forward in this direction, in a republic where the discreet scent of the monarchy has practically never been lost.