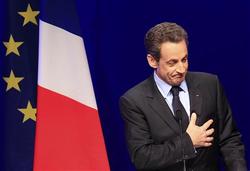 By Paul Taylor and Emmanuel Jarry

The centre-left Hollande narrowly beat the conservative Sarkozy in Sunday’s 10-candidate first round by 28.6 percent to 27.1 percent, the Interior Ministry said with 99 percent of votes counted, but Le Pen stole the show by surging to 18.0 percent, the biggest result for a far-right candidate.

Her breakthrough mirrored advances by anti-establishment Euroskeptical populists from Amsterdam and Vienna to Helsinki and Athens as anger over austerity, unemployment and bailout fatigue deepen due to the euro zone’s grinding debt crisis.

“The battle of France has only just begun,” Le Pen, 43, daughter of former paratrooper and National Front founder Jean-Marie Le Pen, told cheering supporters. Declaring that her wave of support was “shaking the system” of mainstream consensus politics, she said: “We are now the only real opposition.”

The gravel-voiced blonde, who wants France to abandon the euro currency, said she would give her view on the runoff at a May Day rally in Paris next week. But she saved most venom for Sarkozy, aiming to pick up the pieces in any recomposition of the right and hoping the Front can enter parliament in June.

More than one third of French voters cast their ballots for protest candidates outside the political mainstream.

The deeply unpopular Sarkozy, the first sitting president to be forced into second place in the first round of a re-election bid, will have to do the splits to attract both far-right and centrist voters he needs to win the May 6 runoff.

After five years of leading the world’s fifth economy, a nuclear power and activist U.N. Security Council member, he could go the way of 10 other euro zone leaders swept from office since the start of the crisis in late 2009.

Hollande, 57, who opinion polls taken on Sunday showed winning the decider with between 53 and 56 percent of the vote, vowed to change the direction of Europe if elected and lead an economic revival with greater social justice.

“My final duty, and I know I’m being watched from beyond our borders, is to put Europe back on the path of growth and employment,” he told supporters in his constituency of Tulle in southwestern France.

Financial market analysts say whoever wins in two weeks’ time will have to impose tougher austerity measures than either candidate has admitted during the campaign, cutting public spending as well as raising taxes to cut the budget deficit.

A parliamentary election to be held in June will further determine the complexion of the next French government.

“These exit results to me suggest that borrowing costs for France will go up, relative to Germany. We have seen them climbing in recent days and that should continue,” said Simon Derrick, head of currency strategy at Bank of New York Mellon in London.

The Netherlands appears to be headed for early elections after anti-European populist Geert Wilders broke up budget talks with the centre-right minority government on the weekend, opposing austerity measures required to meet EU fiscal targets.

Sarkozy struck a defiant tone after his setback, steering to the right to try to attract Le Pen voters by vowing to tighten border controls, stop factories leaving France, make work pay and uphold law and order, rather than reaching out to centrists.

He challenged Hollande to three live television debates over the next two weeks instead of the customary one. But Socialist aides said Hollande, who has no ministerial experience and is a less accomplished television performer than Sarkozy, had made clear he will accept only one prime-time debate, on May 2.

Communist-backed hard leftist Jean-Luc Melenchon, who polls showed at one stage challenging Le Pen for third place, finished a distant fourth on 11.1 percent, ahead of centrist Francois Bayrou with 9.1 percent. The turnout was a high 80.2 percent.

Political pundits said Hollande appeared to have larger reserves of second-round votes than Sarkozy, who would need to pick up at least three quarters of Le Pen’s supporters and two thirds of Bayrou’s to squeak a wafer-thin victory.

Polls taken on Sunday by three institutes suggested that between 48 and 60 percent of Le Pen voters planned to switch to the president, while Bayrou’s backers split almost evenly between the two finalists, with one third undecided.

Melenchon, whose fiery calls for a “citizens’ revolution” drew tens of thousands to open air rallies, urged his followers to turn out massively on May 6 to defeat Sarkozy, but he could not bring himself to mention Hollande by name.

“Sarkozy is going to be torn between campaigning in the middle ground and campaigning on the right. He’ll have to reach out to the right between the rounds, so he’ll lose the centre,” said political scientist Stephane Rozes of the CAP think-tank.

If Hollande wins, joining a small minority of left-wing governments in Europe, he has promised to renegotiate a European budget discipline treaty signed by Sarkozy. That could presage tension with German Chancellor Angela Merkel, who made the pact a condition for further assistance to troubled euro zone states.

The prospect of friction is causing some concern in financial markets, as is Hollande’s focus on tax rises over austerity at a time when sluggish growth is threatening France’s ability to meet deficit-cutting goals.