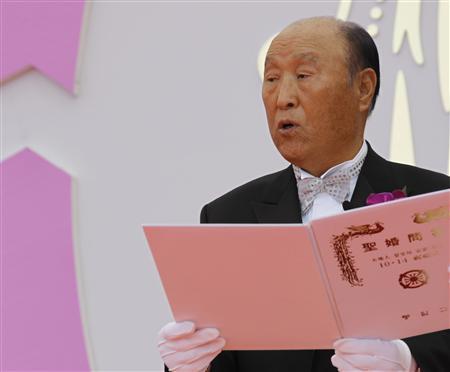 SEOUL (Reuters) – Sun Myung Moon, a self-declared messiah and founder of the Unification Church, died aged 92 on Monday leaving millions of followers and a South Korean-based global empire of religious and business interests.

Moon believed he was chosen by Jesus Christ to continue the work of establishing an ideal world of peace and harmony. From 1961 until recently, he oversaw mass weddings at which thousands were matched with spouses they sometimes had just met and who, in some cases, did not even speak the same language.

But critics vilified his ministry as a heretical, and dangerous cult, and questioned its murky finances and how it indoctrinates its followers, often derided as “Moonies.”

Though its following has fallen in recent years, at its peak in the early 1990s it was believed to have as many as 7 million adherents in 180 nations.

Moon died of complications from pneumonia at a church retreat east of the South Korean capital Seoul where he was moved last week after being hospitalized in mid-August, church officials said.

Though a strident anti-communist, Moon visited North Korea in 1991 and met the reclusive state’s founder Kim Il-sung to discuss business ventures and unification.

His visit angered the government of South Korea, which remains technically at war with the North under a truce that ended the bitter 1950-53 Korean war.

The day-to-day operation of the church is headed by the founder’s son Hyung Jin, a Harvard-trained theologian who grew up in New York. Moon appointed his children to head the church and the Tongil Group that runs its various business interests.

“The death of a founder of a newly formed religious group has a big impact on its survival, but a successful commercial organization outlives the founder, just as Samsung did after Lee Byung-chull’s death and Hyundai after Chung Ju-yung.”

The Unification Church, founded in 1954 in Seoul, runs the Segye Times newspaper in South Korea and more than a dozen other firms in South Korea along with overseas businesses.

The group also runs the conservative Washington Times newspaper and the church has been a staunch supporter of Republicans in the United States, although the current church leader has said Moon backed President Barack Obama.

Born in 1920 in what is now North Korea, Moon’s farming parents followed the Presbyterian church. When he was 15, he said, he met Jesus, who appeared to him as he prayed in the hills and asked him to take on the work of building God’s kingdom on earth.

Moon reportedly refused at first, according to a biography by Mike Breen, former journalist for the Washington Times.

“Jesus asked him a third time: ‘There is no one else who can do this work.’ … “From the comfort of his youthful ideals, he peered over the abyss of the difficulties that would lie ahead and decided. ‘I will do it,’ he promised.”

Moon led an active public life until recently, officiating with his wife at a mass wedding for 2,500 people from around the world in March and in July leading a massive service of more than 15,000 followers.

Moon a served prison term in New York after a 1982 conviction on tax evasion and was released in 1985.