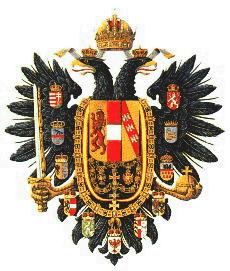 The History of the Habsburgs

Extraído de:http://www.monarchgenealogy.com/habsburghistory.htm
The dynasty first gained power in 1278 when Rudolf of Habsburg seized the Alpine duchies of Austira and Styria. The Apline duchies, parts of land in Switzerland, Italy, France and Germany ruled by the Bohemian king Otakar. Rudolf of Habsburg had already owned family lands in sourthern Germany and Alsace, a region in northern France. Austira became the head, or central point, of the Habsburg Empire. Over the next few centuries the desendants of Ruldolf expanded the empire towards the west. The family seized control Tyrol, a province in western Austria and Northern Italy, and Vorarlberg, the westernmost province of Austria. During this time period the family also gained control of Carinthia, the southern part of Austria.

From the years 1445 till 1792 the head of the Habsburg Family was elected regularly the Holy Roman Emperor. The two grandsons of Emperor Maximillian, Charles and Ferdinand, respectively inherited the thrones of Spain, Hungary and Bohemia. Hungary was a kindom of south central Europe. Bohemia was a collection of provinces in the present today central and eastern part of the Czech Republic. During the time Charles and Ferdinand ruled this land was called th Czech lands. This massive land collection during the sixteenth century emerged the Habsburg as a dominating family.

The reason the Habsburgs were given accession in Hungary and Bohemia abnormal permanency was the combination of the Turkish intimidation and the Counter-Reformation. Emperor Ferdinand, born in 1503, became King of Hungary and Bohemia because in 1526 his predecessor, Louis II of Hungary had died without a legitimate child. He died on the battlefield of Mohács against the Turks. The city-states of Buglaria, and Serbia had failed.  The Habsburg became the supreme power for multiple reasons. The Habsburgs were the defenders of Christianity against Islam. They also were the protector of Catholicism against Protestantism in east-central Europe.

In 1521 Charles V, Holy Roman Emperor, split up the vast empire the Habsburg family owned. He gave his Austrian/German lands to his brother, Ferdinand. He gave his son Spain, Netherlands, parts of Italy, “New World” territories, and Portugal. His son, Philip, would not become a Holy Roman Emperor though. That title was passed down through the Austrian branch of the Habsburg. Since 1521 the Spanish Habsburg were the “major” branch and the Austrian Habsburg were the “minor” branch of the family. Both were allied.

During the Battle of the White Mountain, outside Prague, in 1620 granted the Habsburgs to assumption of key rights of the Bohemian monarchy over legislation, appointments, and citizenship.  In Hungary the Habsburg established power a different way. For over a century and a half the Turks held a mass amount of central Hungary. Both before, during, and after the liberation of nearly all Hungary from the Turks by 1699 there were interminable wars between the Habsburgs and native opponents. The longing peace of Szatmár in 1711 let the Habsburgs take control of most of Hungary. The Holy Roman Emperor Charles VI,  and HungarianSándor Károlyi and János Pálffy signed the treaty. The terms of the peace were Charles promised to maintain the integrity of both Transylvanian and Hungarian estates. The impact of the treaty was distinct on May 1, 1711. On that day over 12,000 former supporters of Rákóczi swore allegiance to the Habsburgdynasty.

The House of Habsburg is greatest known for being a source of all of the formally elected Holy Roman Emperors between 1438 and 1740. The dynasty was originally from Switzerland and first ruled Austria. The Habsburgs sought to solidify their power by the frequent use of familial marriages, also known as intermarriages, which led to disastrous results. Marriages between first cousins, or between uncle and niece, were ordinary in the family. These intermarriages eventually led to the entire extinction of all Habsburg blood in 1780. The Spanish Habsburg died out in 1700 while the Austrian Habsburg line died out in 1740. All blood relatives of the Habsburg were dead by 1780. This was mainly due to intermarriages between close family members.