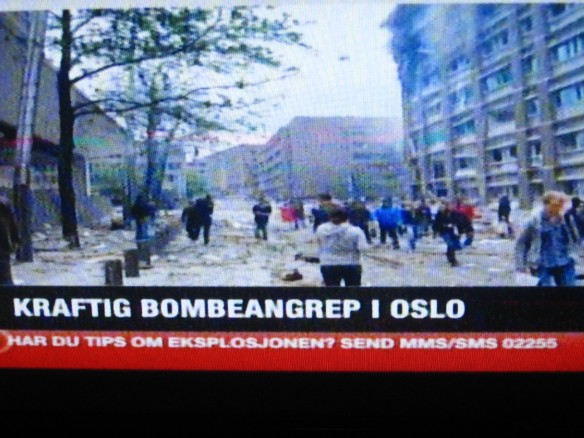 There was no claim of responsibility, though NATO member Norway has been the target of threats, if not bombs, before, notably over its involvement in conflicts in Afghanistan and Libya. Prime Minister Jens Stoltenberg was safe, NTB said.

NRK radio said at least two people were killed in an attack that may have brought global political violence to the quiet Scandinavian city.

“It exploded — it must have been a bomb. People ran in panic and ran. I counted at least 10 injured people,” said bystander Kjersti Vedun, who was leaving the area.

A Reuters reporter at the scene said the blast scattered debris across the streets and shook the entire city center around 3:30 p.m. (9:30 a.m. EDT). He saw eight people injured, one covered in a sheet and apparently dead.

“So far I can confirm that we have received seven people at Oslo University Hospital,” a press officer at the clinic said.

“I don’t know how seriously wounded they are.”

The explosion blew out most of the windows of the 17-storey central government building, cast a huge pall of smoke over the city and scattered shards of metal and other debris for hundreds of meters.

Nearby ministries were also hit, including the oil ministry, which was on fire. Heavy debris littered the streets.

John Drake, senior risk consultant, at London-based consultancy AKE said: “It may not be too dissimilar to the terrorist attack in Stockholm in December which saw a car bomb and secondary explosion shortly after in the downtown area.

“That attack was later claimed as reprisal for Sweden’s contribution to the efforts in Afghanistan.”

The Reuters correspondent said the streets had been fairly quiet in mid-afternoon on a Friday in high summer, when many Oslo residents take vacation or leave for weekend breaks.

The tangled wreckage of a car was outside one building, as well as the damage to the buildings, appeared consistent to witnesses with that from car bombs.

NATO member Norway has sometimes in the past been threatened by leaders of al Qaeda for its involvement in Afghanistan. But political violence is virtually unknown in a country known for sponsoring the Nobel Peace Prize and mediating in international conflicts, including in the Middle East and Sri Lanka.

It has also taken part the NATO bombing of Libya, where Muammar Gaddafi has threatened to strike back in Europe.

David Lea, Western Europe analyst, at Control Risks said: “There certainly aren’t any domestic Norwegian terrorist groups although there have been some al Qaeda-linked arrests from time to time. They are in Afghanistan and were involved in Libya, but it’s far too soon to draw any conclusions.”

(Additional reporting by Gwladys Fouche in Oslo and Peter Apps and William Maclean in London; Writing by Alister Doyle; Editing by Alastair Macdonald)