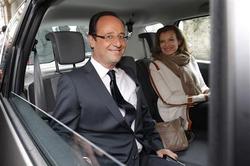 By Lionel Laurent and Catherine Bremer

PARIS (Reuters) – Socialist Francois Hollande swept to victory in France’s presidential election on Sunday in a swing to the left at the heart of Europe that could start a pushback against German-led austerity.

Hollande was set to beat conservative incumbent Nicolas Sarkozy by a decisive 51.9 percent to 48.1 percent margin, the TNS-Sofres polling agency said in a projection based on a partial vote count.

The president conceded defeat within 20 minutes of the last polls closing at 8 p.m. (1800 GMT), telling supporters he had telephoned Hollande to wish him good luck.

“I bear the full responsibility for this defeat,” he said.

Sarkozy, punished for his failure to rein in record 10 percent unemployment and for his brash personal style, is the 11th successive leader in the euro zone to be swept from power since the currency bloc’s debt crisis began in 2009.

Jubilant left-wingers celebrated outside Socialist Party headquarters and in Paris’ Bastille square, where revelers danced in 1981 when Francois Mitterrand became France’s only other Socialist president.

But the celebrations may be overshadowed by a political bombshell in Greece, where mainstream parties were hammered in a parliamentary election that exit polls suggested may leave supporters of Athens’ IMF/EU bailout without a majority, raising doubts about its future in the euro zone.

Hollande’s clear win should give the self-styled “Mr Normal” the authority to press German Chancellor Angela Merkel to accept a policy shift towards fostering growth in Europe to balance the austerity that has fueled anger across southern Europe.

His margin also positions the Socialists strongly to win a left-wing majority in parliamentary elections next month, vital to implement his plans for a swift tax reform.

If it wins that two-round election on June 10 and 17, the Socialist Party would hold more levers of power than ever in its 43-year history, with the presidency, both houses of parliament, nearly all regions, and two-thirds of French towns in its hands.

Even before the results were declared, cheering crowds gathered at Socialist headquarters to acclaim the party’s first presidential victory since Mitterrand’s re-election in 1988. Many waved red flags and some carried roses, the party emblem.

In Bastille square, flashpoint of the 1789 French Revolution and the left’s traditional rallying point for protests and celebration, activists began partying two hours before the polls closed and a swelling crowd cheered as giant TV screens relayed the results.

Hollande, a mild-mannered career politician, had held a steady lead for weeks after outlining a comprehensive program in January based on raising taxes, especially on high earners, to finance spending and keep the public deficit capped.

As much as his own program, he is benefiting from an anti-Sarkozy mood due to the incumbent’s abrasive personal style and to anger about the same economic gloom that has swept aside leaders from Dublin to Lisbon and Athens.

“If Hollande is elected, we will have eliminated for personal reasons someone remarkably competence, not just in France but in Europe,” said Christian Fabry, 72, who was among Sarkozy supporters waiting dejectedly in a Paris hall for the result.

Sarkozy launched his campaign late and swerved hard to the right as he tried to win back low-income voters that polls show have ditched him for either the radical left or extreme right.

His aggressive rallies and promises to rein in immigrant numbers, crack down on tax exiles and make the unemployed retrain as a condition of getting benefits did not reduce Hollande’s lead. Sarkozy surprised many by failing to land anything like a knockout punch in a televised debate.

Although Sarkozy shaved a couple of points off Hollande’s lead in the last days of a frenetic campaign, aides privately acknowledged it would take a miracle to clinch a second term.

In two further blows in the last days of the race, far-right leader Marine Le Pen, who came third in the first round with 17.9 percent, and centrist Francois Bayrou, who came fifth with 9.1 percent, refused to endorse the conservative president.

The election comes at a crucial time for the euro zone as France, Europe’s No. 2 economy, is a vital partner for Berlin.

Hollande will join a minority of left-wing governments in Europe and has vowed to renegotiate a budget discipline treaty signed by 25 EU leaders in March, to add growth measures. Berlin has made the pact a pre-condition of aid for struggling states.

Hollande plans to visit the centre-right Merkel in Berlin within days of the election to discuss his ideas and planned to speak to her by telephone on Sunday evening, said Jean-Marc Ayrault, tipped as a likely Socialist prime minister.

While financial markets are warming to Hollande’s growth agenda, given growing support elsewhere in Europe, analysts say he would need to reassure investors quickly about his economic plans as fears resurface over the euro zone’s debt woes.

France is grappling with feeble growth and 10 percent unemployment, a gaping trade deficit and high state spending that is straining public finances and was a factor in Standard & Poor’s removing its triple-A credit rating.

French 10-year bond yields fell to 2.87 percent on Friday, a level not seen since early October. Yet French debt could remain vulnerable to selling pressure, as markets and credit rating agencies wait to be convinced of his fiscal credentials.

Economists want Hollande to trim over-optimistic growth forecasts and impose spending cuts, but political analysts say this would be difficult with left-wing voters hoping he will raise the minimum wage and reverse a recent sales-tax rise.

Little known outside France, Hollande will soon have his diplomatic skills tested at a Chicago NATO summit in late May and a Group of 20 summit in Mexico in late June. The former Socialist Party chief has never held a ministerial post.