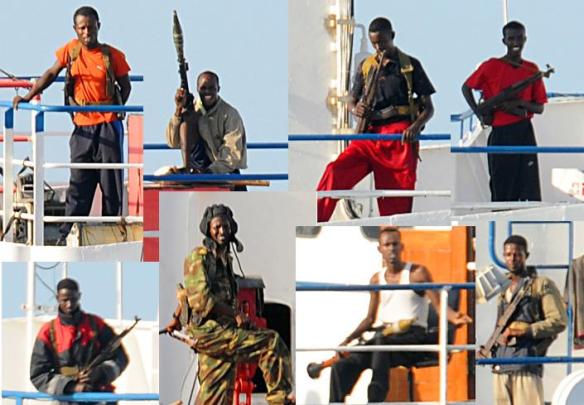 New research suggests piracy has led to widespread economic development in some parts of Somalia.

Regional centres have benefited from substantial investment funded by piracy, but coastal communities have missed out, the report indicates.

International naval patrols in the Gulf of Aden are making it more difficult for Somali pirates to launch attacks.

However, at least 40 vessels and more than 400 hostages are still being held in or just off Somalia, according to the Ecoterra International group which monitors piracy in the region.

A two-decade civil war in Somalia has allowed pirates to flourish.

Some of them are former fishermen who say they were put out of business by trawlers from around the world taking advantage of the power vacuum to fish in Somali waters.

The study suggests a land-based solution is needed to tackle the problem.

The night pictures show a significant increase in light emissions from centres such as Garowe and Bosasso in the semi-autonomous Puntland region where most of the pirates are based.

This suggests an increase in electricity consumption because of economic development, the study says.

The increase in the highest intensity light spots in those cities came despite a general decline in intensity across Somalia, which Ms Shortland attributes to global food and energy price rises and renewed conflict.

None of the pirate communities on the coast appeared to have enough power, she observed.

Analysis of daytime satellite image showed that Garowe almost doubled in area between 2002 and 2009, with significant housing, industrial and commercial developments.

Many houses were newly built or repaired between those dates and a much larger number have vehicles parked outside.

The key pirate centres of Eyl and Hobyo, by contrast, showed evidence of only limited and relatively small improvements to their infrastructure.

The report concludes that significant amounts of ransom money are spent in the regional centres, with the benefits being shared out between a large number of people due to the clan structures in place.

“Puntland’s political elites are therefore unlikely to move decisively against piracy,” it says.

In addition to satellite images, the Chatham House report analysed information collected by non-governmental organisations on commodity prices and wages.

Data from the Food Security and Nutrition Analysis Unit suggests nominal daily wages in the pirate provinces of Nugal and Muduq “have caught up with and then overtaken non-pirate regions since the explosion of piracy in 2008,” the study says.

“This is likely to reflect both direct employment opportunities and investments into local businesses.”

The report adds that the positive effect of piracy on incomes in parts of Puntland has been offset by the impact of food price inflation.

In response to the massive increase in piracy off Somalia in 2008 and international naval force was established to patrol the seas off Somalia.

The Chatham House report observes that pirate attacks off Somalia have become considerably more violent since mid-2010, because of the increased difficulty of capturing ships.

“Pirates now invest more resources in maximising the return from each captured ship,” it says.

The report also warns that if pirates increase their co-operation with Islamist militants from the al-Shabab group, piracy could end up funding regional instability and terror.

Ms Shortland argues that a land-based response is necessary to help tackle piracy.

“A negotiated solution to the piracy problem should aim to exploit local disappointment among coastal communities regarding the economic benefits from piracy and offer them an alternative that brings them far greater benefits than hosting pirates does,” she says.

“A military crack-down on the other hand would deprive one of the world’s poorest nations of an important source of income and aggravate poverty.”