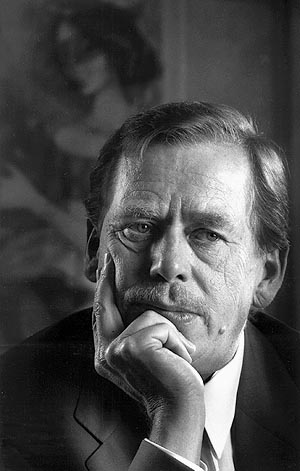 For Vaclav Havel, and for his people, everything changed in 1989, the year of Czechoslovakia’s Velvet Revolution, when he led the extraordinary display of people power which toppled the ruling communist regime.

The world watched with astonishment as, within weeks, the dissident playwright became president.

Vaclav Havel was born in 1936. His father was a successful engineer and, by his own admission, young Vaclav was a pampered child from a wealthy family.

But when the communists came to power he saw his family lose everything.

The new government decided the young Havel was “too bourgeois” to be allowed a secondary education.

He organised one for himself, studying at night school, while working as a laboratory technician during the day.

The year 1968 brought the Prague Spring led by Alexander Dubcek, the first flowering of reform and of hope for Czechoslovakia.

But the Soviet invasion of Czechoslovakia crushed the dreams of Havel and his generation. Suddenly, his work was banned in his homeland.

He produced a series of one-act plays, which had to be performed in private homes. His underground theatre was steeped in politics, and yet Havel denied he was anything other than an artist.

“I never wanted to be a political writer,” he once said. “I think that good writers and good art and particularly, good theatre, is always political, not because writers and directors want to be political, but because it is something which is in the substance of theatre.”

A few years later he helped found the Charter 77 movement for democratic change. By now, Vaclav Havel had become Czechoslovakia’s most famous dissident.

Jailed for the alleged crime of “anti-state activity”, he was kept under constant surveillance by the secret police, even when he was out of prison.

But by the end of 1989, Havel found himself discussing the future of the nation with the very people who had sent him to jail. The Communist Party was disintegrating, and democracy was taking its place.

After the 18 days of peaceful demonstrations and strikes that became known as the Velvet Revolution, the communist government was brought down.

In a solemn service at Prague’s Roman Catholic cathedral in December 1989, Havel was duly installed as head of state. The prisoner-turned-president said afterwards that he had never felt so absurd.

Unlike previous eastern European leaders, he was refreshingly open, some would say eccentric, on occasions travelling around his vast palace on a child’s scooter.

A fan of rock music, he made the American musician Frank Zappa an honorary cultural ambassador.

But the fairy tale soon went sour. Slovakian nationalists campaigned for, and won, independence. Havel’s beloved country was divided into two and he was shouted down by demonstrators.

Commenting that “after every party there’s a hangover”, Havel resigned the presidency, only to be re-elected leader of the new Czech Republic a few months later, in January 1993.

He presided over the painful transition from communism to capitalism. Industry was privatised en masse. Foreign firms like Volkswagen started taking over and Havel criticised the corruption that accompanied the sale of huge state assets.

In his later years, Vaclav Havel was beset by bad health. He had part of a lung removed during surgery for cancer and had a number of serious bouts of pneumonia.

After stepping down at the end of his second term as president in 2003, he devoted time to supporting human rights activists around the world.

Havel also returned to writing and published a new play, Leaving, which premiered in 2008. He then, at the age of 74, made his debut as a film director, adapting Leaving for the cinema earlier this year.

And while he was shut out of day-to-day politics by shrewder Czech politicians, Vaclav Havel was still feted around the world as a much-admired, if rather nervous, ambassador for his country and never a natural professional politician.

Havel was uncomfortable with the pomp and ceremony which surrounded him. He longed to return to full-time writing which was, perhaps, why his people so loved and respected him.

This, after all, was the man who had not only helped destroy communist rule, but who had managed to do so without bloodshed.