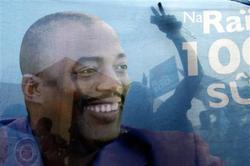 KINSHASA (Reuters) – The main challenger in Democratic Republic of Congo’s election declared himself president on Friday and poured scorn on provisional official results handing victory to the incumbent, Joseph Kabila.

Clashes broke out between tire-burning protesters and security forces in the mostly pro-opposition capital Kinshasa and fears mounted that a post-election dispute would reignite conflict in the war-scarred central African state.

The head of the electoral commission said on Friday Kabila won nearly 49 percent of the votes to his rival Etienne Tshisekedi’s roughly 32 percent, results that an observer group later said appeared suspicious.

Electoral commission chief Daniel Ngoy Mulunda called for calm. “(The results) are no reason to whip up the population against the established order to contest the results, or to settle scores,” he told officials and diplomats gathered to hear the results.

Tshisekedi said he rejected Kabila’s victory and considered himself the newly elected leader of Congo.

“I consider these results a real provocation of the Congolese people,” he said in an interview on RFI radio. “As a consequence, I consider myself, from today, the elected president of the Democratic Republic of Congo.”

Opposition supporters burned tyres in parts of Kinshasa, a sprawling city of 10 million, and chanted Tshisekedi’s campaign slogan, “the people first.” A U.N. source said there had been clashes with security forces and reports of shooting.

Gunfire erupted in Mbuji Mayi, an opposition stronghold in the south of the country, an hour after Kabila was named winner, a local civil society leader said. “We can hear gunshots everywhere, it’s still going on,” he told Reuters.

Celebration broke out in other parts of the country.

At least 18 people have been killed in election-related violence so far, according to U.S.-based Human Rights Watch, as opposition protesters took to the streets alleging the government was attempting to rig the vote.

The November 28 poll was Congo’s first locally organized presidential contest since a war that killed more than 5 million, and is meant to move the country towards stability and encourage investment after years of conflict and turmoil.

Government Communications Minister Lambert Mende said Tshisekedi’s self-declaration as president was “nonsense and illegal” and warned that it could spark violence.

“We’re calling for Mr. Thshisekedi to come back to legality and not to threaten the peace of the country just because the people didn’t choose him,” he told Reuters by telephone.

The dispute mirrored a post-vote crisis in Ivory Coast that sparked a civil war. But unlike in Ivory Coast, the U.N. mission will not be in a position to take sides, as it does not have a mandate to certify the results and did not observe the poll.

The announcement of the result had been delayed twice earlier in the week due to logistical problems and as donor nations urged more transparency, stretching the nerves of residents both eager for and worried about the outcome.

An international observer said workers were analyzing results posted on the election commission website but said they had already spotted a number of irregularities, notably in Katanga, where Kabila had scored particularly well.

In some districts of Katanga, voter turnout was pegged at nearly 100 percent with all or nearly all of the votes going to Kabila, according to the website. (click here for an example: here)

“These results aren’t even naturally occurring, you simply don’t get that many people all being healthy, motivated, getting to the polls and voting in such unison,” said David Pottie, mission manager for the U.S.-based Carter Center.

“It’s a fundamental mark of disrespect for Congolese voters… The sole owner of responsibility for this is the (electoral commission). Its agents have signed off on these kind of results in multiple places,” he said.

The website also showed that the results from nearly 2,000 polling stations in Kinshasa, potentially amounting to about 700,000 votes, have not been tallied.

Third-placed finisher Vital Kamerhe said he also rejected the results, in part because of the Katanga numbers. “The Congolese people have chosen Etienne Tshisekedi,” he said.

In Katanga’s capital Lubumbashi, the heart of the country’s copper mining industry, residents were blowing vuvuzela horns and whistles and others were firing guns into the air in celebration, a foreigner living there said.

“People are singing, there is clearly a lot of joy,” he told Reuters by telephone, asking not to be named.

Britain’s Minister for Africa, Henry Bellingham, said he was concerned by reports of irregularities with the vote, but urged that “any challenges to the results should be conducted through the proper channels, not through violence.”

“Similarly, the reaction of the security forces to any disturbances will be key; they need to react proportionately and avoid escalating confrontations,” he said in a statement.

The government of neighboring Congo Republic said this week it is preparing a refugee camp north of Brazzaville in case violence forces people to flee across the Congo River.

Kabila came to power when his father Laurent was assassinated in 2001, and later won the country’s 2006 polls. He has struggled to control marauding rebel groups in Congo’s east despite United Nations backing.

Congo is last on the U.N. human development index despite rich mineral resources, and investors say it remains one of the most challenging countries in the world in which to do business.