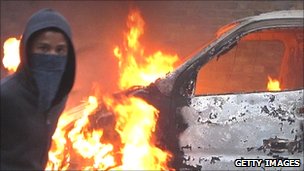 Sporadic violence has broken out inseveral cities around England, although London remained largely quiet with a heavy police presence on the streets.

With 16,000 police officers deployed in London, the streets remained calm after three previous nights of rioting.

But there was unrest in Manchester, Salford, Liverpool, Wolverhampton, Nottingham, Leicester and Birmingham with shops being looted and set alight.

The PM is recalling Parliament over Monday night’s “sickening scenes”.

Forty seven people have been arrested so far over trouble in Manchester and Salford where crowds of youths have set fire to buildings and cars while 87 have been arrested over disorder which has broken out across the West Midlands.

Salford MP Hazel Blears said local police had assured her that officers’ shifts had been extended and that “every effort” was being made to get all available police on the streets.

She also told the BBC that the “wall-to-wall” coverage of the violence may have encouraged more lawlessness.

Some 111 Met officers have suffered injuries including serious head and eye wounds, cuts and fractured bones after being attacked by rioters wielding bottles, planks, bricks and even driving cars at them. Five police dogs have also been hurt.

However, Scotland Yard has drafted in special constables and community support officers to ensure five times the usual number of officers for a Tuesday will be on duty. Similar staffing levels will be maintained over three days.

David Cameron, who will chair a meeting of the Cabinet’s emergency committee Cobra for the second day running at 09:00 BST, met officers in the Met Police’s Gold command in Lambeth on Tuesday afternoon, before speaking to emergency service personnel in Croydon.

The prime minister returned early from his holiday in Tuscany to discuss the unrest, which first flared on Saturday after a peaceful protest in Tottenham over the fatal shooting of Mark Duggan, 29, by police.

London has seen a wave of “copycat criminal activity” since the initial disturbance, the Met Police said.

Deputy Assistant Commissioner Stephen Kavanagh said the use of plastic bullets – never before fired to deal with riots in England – would be “considered carefully” in the event of further disorder.

But he added: “That does not mean we are scared of using any tactic.”

Acting Commissioner Tim Godwin had earlier ruled out calling in the Army.

The Association of British Insurers says the damage is likely to cost insurers “tens of millions of pounds”.

Monday’s violence started in Hackney, north London, at about 16:20 BST after a man was stopped and searched by police, who found nothing.

Groups of people began attacking officers, wrecking cars with wooden poles and metal bars, and looting shops. Violence then flared separately in other parts of the capital.

Mayor of London Boris Johnson, who also cut short a holiday to return, was heckled by the members of the public while viewing damage in Clapham Junction on Tuesday.

Some people have complained there have been too few police to deal with the violence.

Mr Johnson told those gathered that those responsible for the violence “face punishment they will bitterly, bitterly regret”.

However, when challenged to do more for communities, Mr Johnson rejected “economic or social justifications” for the violence.