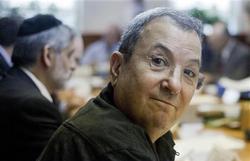 LONDON (Reuters) – Iran has drawn back from its ambitions to build a nuclear weapon, Israel’s defense minister was quoted as saying on Tuesday, while warning that his country may still have to decide next year whether to launch a military strike against it.

Tehran denies its nuclear work has any military dimensions but governments in Europe and the United States are increasingly concerned over its intentions.

Diplomacy and successive rounds of economic sanctions have so far failed to end the decade-old row, raising fears of Israeli military action against its arch-enemy.

Defense Minister Ehud Barak told Britain’s Daily Telegraph newspaper that an immediate crisis was avoided when Iran chose to use more than a third of its medium-enriched uranium for civilian purposes earlier this year.

He told the paper that the decision “allows contemplating delaying the moment of truth by eight to ten months”.

“There could be at least three explanations. One is the public discourse about a possible Israeli or American operation deterred them from trying to come closer,” he said.

“It could probably be a diplomatic gambit that they have launched in order to avoid this issue culminating before the American election, just to gain some time. It could be a way of telling the IAEA (International Atomic Energy Agency) ‘oh we comply with our commitments’.”

Analysts say Iran already has enough low-enriched uranium for several nuclear bombs if it were refined to a high degree, but may still be a few years away from being able to assemble a missile if it decided to go down that path.

Western diplomats say Iran appears to have nearly finished installing centrifuges at an underground nuclear plant, potentially boosting its capacity to make weapons-grade uranium if it chose to do so.

Asked by the British newspaper whether, if Iran had not pulled back, the crisis would have peaked “about now”, Barak said: “Probably yes”. He added however that he believed Iran was still resolved to build nuclear weapons.

“We all agree that the Iranians are determined to turn into a military nuclear power and we all share the declaration that we are determined to prevent Iran from turning nuclear and all options are on the table,” he was quoted as saying.

“We mean it – we expect others to mean it as well. So it’s not something just about us. But we, for obvious reasons, see the Iranian threat in much more concrete terms.”

He said Israel reserved the right to act alone.

“When it comes to the very core of our security interests and, in a way, the future of Israel, we cannot delegate the responsibility for making decisions even into the hands of our most trusted and trustworthy ally,” he told the Telegraph.

“It doesn’t mean that we would be sorry if the Iranians come to the conclusion on their own. The opposite is true. But, if no one acts, we will have to contemplate action.”