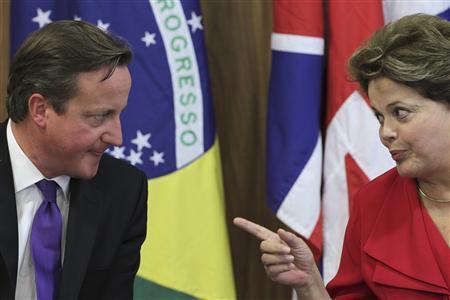 BRASILIA (Reuters) – British Prime Minister David Cameron had oil and sports on his mind when he visited Brazil this week seeking business opportunities in the South American nation that overtook Britain last year to become the world’s No. 6 economy.

With the European Union in a slump, Cameron has turned to emerging BRIC nations – Brazil, Russia, India and China – as alternative markets for British exports and investments, with little to show so far.

“I think we can do a lot better,” Rousseff said of growing but still negligible trade and investment flows between the two countries.

Rousseff said British interest in Brazil had come at the right time after her government announced last month a $66 billion investment in road and railway building as part of a massive plan to upgrade her country’s dilapidated infrastructure, which includes modernizing ports and airports.

Following the success of the London Olympics this summer, Rousseff said Brazil was seeking British cooperation to prepare for the 2014 Soccer World Cup and the 2016 Olympics Games.

Cameron said British companies had signed more than $161 million in deals during his two-day visit, with another $400 million in potential contracts for companies that can help Brazil get ready for the two global sporting events it will host.

Foster laid out the oil company’s $236 billion investment plan for the next five years to develop Brazil’s sub-salt off-shore oil reserves and become one of the world’s top producers.

“We have an enormous potential in the oil and gas field, an enormous challenge, and we are open for business for the British industry in oil equipment and services,” Foster told them.

“If you can’t beat them, join them,” he said in a speech to businessmen, urging a greater British partnership with Brazil.