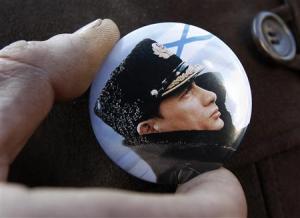 Putin to win Russian election in first round: poll

MOSCOW (Reuters) – Vladimir Putin will be elected president in the first round of March’s election with more than half the vote, avoiding a runoff that would dent his authority on the eve of his planned return to the Kremlin’s top job, a state pollster predicted Monday.

Prime Minister Putin hopes to convincingly win the March 4 election in order to take the sting out of a growing urban protest movement which casts him as an authoritarian leader who rules through a corrupt and tightly controlled political system.

Once cast as Russia’s “alpha-dog” leader by U.S. diplomats, talk of anything less than complete victory for Russia’s paramount leader was unthinkable before the protests, the biggest of his 12-year rule.

Putin is likely to win 58.6 percent of the vote, far ahead of his closest rival, said Russia’s Public Opinion Research Center (VTsIOM), which has a history of accurately predicting the results of Russian elections.

“Putin will gain victory,” the pollster’s general director, Valery Fedorov, told reporters in Moscow. The forecasts were based on a poll of 1,600 people carried out across Russia this month.

Second place will go to veteran Communist leader Gennady Zyuganov, who is likely to win 14.8 percent, the pollster said.

A mood change against Putin among voters in major cities has stoked speculation that the former KGB spy might face the humiliation of winning less than half of the vote, undermining his claims of majority support and triggering a second round.

Putin even conceded this month that he may face a second round, though he warned such a step would stoke infighting and undermine Russia’s political stability.

But the poll indicates that though Putin is facing the biggest protests of his 12-year rule, his aides believe the former KGB spy can still bring in enough votes to secure another six years as Kremlin chief.

Putin’s former chief of staff, Alexander Voloshin, said the latest forecasts for the elections indicated Putin could win 59-61 percent of the vote. The news, he said on Twitter, would make many “sleep more soundly.”

Though the poll may ease concerns within the Kremlin about the outcome of the election, it also indicates at least a 10 percentage point decline for Putin since his last presidential election.

Opponents such as Communist leader Zyuganov and blogger Alexei Navalny say that the election will not be legitimate as officials are bound to falsify the results in Putin’s favor.

Putin was clearly taken aback by the scale of the protests against the December 4 parliamentary election, initially dismissing opponents as the pawns of the West and even branding them chattering monkeys.

But as the seriousness of the challenge became evident, Russia’s most popular politician changed tack, reshuffling his team and approving some planned changes to open up the tightly controlled political system he still dominates.

The protest leaders, a fragmented group of politicians, activists, journalists and bloggers, have called for a re-run of the parliamentary election which they was rigged. Official results show Putin’s ruling party won 49.3 percent of the vote.

During the parliamentary election, VTsIOM’s exit poll was less than 1 percentage point off the official result, forecasting Putin’s United Russia party would win 48.5 percent of the vote.