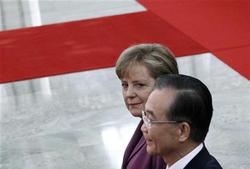 By Lucy Hornby and Andreas Rinke

But Wen did not make any explicit financial commitments for the European Financial Stability Facility (EFSF) or the upcoming European Stability Mechanism (ESM).

At a joint media briefing in Beijing with visiting German Chancellor Angela Merkel, Wen said China is still studying how it might lend further support, including possibly through the IMF.

“China is also considering increasing its participation in the solution of the European debt crisis through the channels of the EFSF and ESM,” Wen said.

The ESM, a 500-billion-euro ($650 billion) permanent bailout fund that is due to become operational in July, is expected to replace the EFSF, a temporary fund that has been used to bail out Ireland and Portugal and will help in the second Greek package.

China, with its $3.2 trillion worth foreign exchange reserves, is often seen as a potential source for the funds that are needed to bail out some European governments.

China has repeatedly said it supports a stable euro, and according to most estimate, China has about a quarter of its foreign exchange reserves in euro assets.

However, Beijing has consistently been reluctant to make specific promises about any contributions to the rescue funds.

Merkel told reporters that Chinese leaders again emphasized in their discussions that Europe must rely on itself to solve its own problem.

“China . is ready to work for a stable euro in its general responsibility for a stable global economy,” Merkel said.

She stressed that the stabilization of the euro was a matter for European nations. “We must do our homework,” she said, adding the world expected Europe to present a united front.

Ahead of Merkel’s visit, few analysts expected her to come away with specific commitments and instead characterized the visit as a confidence-building effort as Germany seeks Beijing’s support for the ailing euro.

“The Chinese side supports efforts to maintain the stability of the euro and the euro zone,” Wen said, and noted that Beijing is confident in the European economy.

China and other countries beyond the 17-country euro bloc want to see its members stump up more money before they commit additional resources to the IMF, which had requested an additional 500 billion euros in funding.

“China is investigating and evaluating ways, through the IMF, to be more deeply involved in solving the European debt problem via ESM/EFSF channels,” Wen said.