China warns U.S. to be “careful” in military refocus 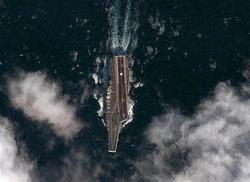 BEIJING (Reuters) – China’s Ministry of Defence warned the United States on Monday to be “careful in its words and actions” after announcing a defence rethink that stresses responding to China’s rise by shoring up U.S. alliances and bases across Asia.

The statement from the ministry spokesman Geng Yansheng was Beijing’s fullest reaction so far to the new U.S. strategy unveiled last week. It echoed the mix of wariness and outward restraint that has marked China’s response to the Obama administration’s “pivot” to Asia since late last year.

“We have noted that the United States issued this guide to its defence strategy, and we will closely observe the impact that U.S. military strategic adjustment has on the Asia-Pacific region and on global security developments,” Geng said in a statement issued on the ministry’s website (www.mod.gov.cn).

“The accusations leveled at China by the U.S. side in this document are totally baseless,” said Geng.

“We hope that the United States will flow with the tide of the era, and deal with China and the Chinese military in an objective and rational way, will be careful in its words and actions, and do more that is beneficial to the development of relations between the two countries and their militaries.”

The new U.S. strategy promises to boost strength in Asia in an attempt to counter China’s growing ability to check U.S. power in the region, even as U.S. forces draw back elsewhere across the globe.

Under the new strategy, the United States will maintain large bases in Japan and South Korea and deploy U.S. Marines, navy ships and aircraft to Australia’s Northern Territory.

The strategy calls for countering potential attempts by China and Iran to block U.S. capabilities in areas like the South China Sea and the Strait of Hormuz.

China has sought to balance voicing its wariness about the U.S. moves with its desire for steady relations with Washington, especially as both sides grapple with domestic politics this year, when President Barack Obama faces a re-election fight and China’s ruling Communist Party undergoes a leadership handover.

So far, Beijing officials have avoided the usual high-pitched assertions that Washington is bent on encircling China, a view widely echoed by popular Chinese newspapers and websites.

The expanded U.S. military presence in Asia is based on a miscalculation of Beijing’s intent to modernize its military defenses, the Chinese Foreign Ministry said on Monday.

“The accusation targeting China in the document has no basis, and is fundamentally unrealistic,” Foreign Ministry spokesman Liu Weimin said at a regular news conference, in response to a question from state media about whether China poses a threat to U.S. security.

“China adheres to the path of peaceful development, an independent and peaceful foreign policy and a defensive national defence policy,” Liu added.

Still, there is growing concern in the United States and Asia about China’s military developments in recent years.

China has been expanding its naval might, with submarines and a maiden aircraft carrier, and has also increased its missile and surveillance capabilities, extending its offensive reach in the region and unnerving its neighbors.

The disputed ownership of oil-rich reefs and islands in the South China Sea, through which $5 trillion dollars in trade sails annually, is one of the biggest security threats in Asia.

China is seen by many neighbors as increasingly assertive on the high seas, with several incidents in the past year in the South China Sea, waters claimed wholly or in part by China, Taiwan, the Philippines, Malaysia, Vietnam and Brunei.

But Chinese President Hu Jintao has made clear he wants to avoid repeating the rifts that soured ties with Washington in the first half of 2011. Hu retires from power late in 2012 and his almost-certain successor, Vice President Xi Jinping, is likely to visit the United States in coming months.