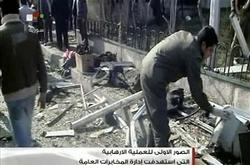 An interior ministry spokesman raised the death toll to 44 people in an evening address on state television, blaming al Qaeda for the blasts which hit two security buildings.

They struck a day after Arab League officials arrived to prepare for monitors who will check whether Assad is implementing a plan to end the bloodshed. The first monitors will travel to Syria on Monday, Egypt’s news agency said.

Assad has unleashed tanks and troops to try to crush nine months of street protests inspired by other Arab uprisings this year. Mainly peaceful rallies are now increasingly eclipsed by an armed insurgency against his military and security apparatus.

But Friday’s blasts in central Damascus signaled a dramatic escalation in violence, which Syrian authorities blame on armed groups they say have killed 2,000 soldiers and security force members this year. The United Nations says Assad’s crackdown has killed 5,000 people.

“It’s a new phase. We’re getting militarized here,” said Joshua Landis, a Syria expert at the University of Oklahoma who felt Friday’s bombs were a “small premonition” of what may come in a country that some analysts see slipping towards civil war.

“This is when the Syrian opposition is beginning to realize they are on their own,” he added, referring to Western reluctance to intervene militarily in Syria.

The interior ministry spokesman said 166 people were wounded by the explosions. It broadcast footage of mangled bodies being carried in blankets and stretchers into ambulances.

Bloodied streets were littered with human remains, blackened hulks of cars and a row of corpses wrapped in sheets.

“This is a qualitative escalation of the terrorist operations that Syria has been exposed to for the last nine months,” the interior ministry spokesman said.

“These two suicide terrorist operations show, once again, the real face of the plot seeking to shake Syria’s stability.”

He said the first car bomb struck the main entrance of Damascus security branch at 10.18 am. The second bomb, one minute later, hit a central intelligence building.

Foreign Ministry spokesman Jihad Makdesi said the attacks were carried out by “terrorists (trying) to sabotage the will for change” in Syria, and followed warnings from Lebanon that al Qaeda fighters had infiltrated Syria from Lebanese territory.

The United States condemned the attacks, saying there was “no justification for terrorism of any kind” and that the work of the Arab League should not be hindered.

There was no immediate claim of responsibility. Al Qaeda are Sunni Muslim militants. Assad and Syria’s power elite belong to the Alawite branch of Shi’ite Islam while the majority of Syrians, including protesters and insurgents, are Sunnis.

Assad’s opponents said the attack could have been staged to drive home the government’s argument. “We have all sorts of suspicions that this could be organized by the regime itself,” said Basma Qadmani, spokeswoman for the Syrian National Council.

Activists said they were surprised at the speed with which authorities leveled accusations at al Qaeda, barely an hour after the explosions shook a central district which residents said is well-policed and has restrictions on traffic movement.

Syria has generally barred foreign media from the country, making it hard to verify accounts of events from either side.

Analysts said authorities were unlikely to have staged an attack that only serves to highlight their vulnerability.

“There is a war going on in Syria now,” said Rami Khouri, director of the Issam Fares Institute in Beirut, saying various armed rebel or Islamist groups could have staged the bombings.

The last serious attack of its kind in the tightly-controlled Syrian capital was three years ago, when a car bomb went off near a security complex, killing 17 civilians.

That attack, for which Syrian authorities blamed an Islamist suicide bomber using a car brought in from a unnamed neighboring Arab country the day before, was one of the biggest in Damascus since an Islamist militant campaign in the 1980s against Hafez al-Assad, late father of the current president.

Hilal Khashan, a political scientist at the American University in Beirut, said neither the government nor al Qaeda were likely to have been responsible for Friday’s attack.

“When it comes to security in Damascus … the government does not play games,” he said.

“I think this is the symptom of desperation after so many Syrians have seen blood and death in the crushing of protests.”

The United Nations says Assad’s forces have killed more than 5,000 people in their crackdown on the protests, which erupted in March instigated by uprisings that toppled autocratic leaders in Tunisia, Egypt and Libya over the course of the year.

The opposition Syrian Observatory for Human Rights said 15 civilians were killed outside the capital on Friday, eight of them in the city of Homs which has been a centre of protest.

The intensifying violence on both sides in Syria has raised fears that the country is drifting towards civil war. Downtown Damascus and Syria’s second city Aleppo hitherto had largely escaped the turmoil now common in many other cities and towns.

“First I heard an explosion and then, all of a sudden, I saw human limbs flying everywhere,” said a man interviewed by Syrian television near the site of the attack in Kafr Sousa.

His head and face were covered in bandages.

State media said the Arab League delegation, which will be seeking assurances of free movement for 150 monitors due to arrive in Syria by the end of the month, had visited the sites of the explosions to inspect the damage.

The monitors are supposed to verify Syria’s implementation of an Arab League peace plan it agreed six weeks ago, which stipulates a withdrawal of troops from protest-hit cities and towns, release of prisoners and dialogue with the opposition.

Activists say Assad, 46, is still trying to suppress public dissent with military force despite European Union and Arab League sanctions, and his avowed commitment to the peace plan.

Damascus says more than 1,000 prisoners have been freed since the Arab plan was agreed and the army has pulled out of cities. Anti-Assad activists deny any such pullout has occurred.

The government has promised a parliamentary election early next year as well as constitutional reform that might loosen the Baath Party’s 48-year grip on power.

Syrian pro-democracy activists are deeply skeptical about Assad’s commitment to the plan. If implemented, it could embolden demonstrators demanding an end to his 11-year rule, which followed three decades of domination by his father.

The British-based Avaaz rights group said on Thursday it had evidence of more than 6,237 deaths of civilians and security forces in the conflict, 617 of them under torture. At least 400 of the dead were children, it said.