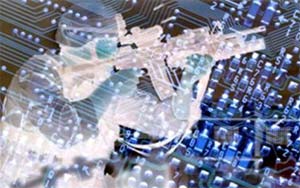 WASHINGTON (Reuters) – The National Security Agency has a challenge for hackers who think they’re hot stuff: prove it by working on the “hardest problems on Earth.”

Computer hacker skills are in great demand in the U.S. government to fight the cyber wars that pose a growing national security threat — and they are in short supply.

For that very reason an alphabet soup of federal agencies — DOD, DHS, NASA, NSA — are descending on Las Vegas this week for Defcon, an annual hacker convention where the $150 entrance fee is cash only — no registration, no credit cards, no names taken. Attendance is expected to top 10,000.

The National Security Agency is among the keen suitors. The spy agency plays both offense and defense in the cyber wars. It conducts electronic eavesdropping on adversaries and protects U.S. computer networks that hold super secret material — a prize target for America’s enemies.

“That’s the race that we’re in today. And we need the best and brightest to be ready to take on this cyber warrior status,” he told Reuters in an interview.

The NSA is hiring about 1,500 people in the fiscal year which ends September 30 and another 1,500 next year, most of them cyber experts. With a workforce of just over 30,000, the Fort Meade, Maryland-based NSA dwarfs other intelligence agencies, including the CIA.

It also engages in cyber-spying and other offensive operations, something it rarely, if ever, discusses publicly.

But at Defcon, the NSA and other “Feds” will be competing with corporations looking for hacking talent too.

The NSA needs cyber security experts to harden networks, defend them with updates, do “penetration testing” to find security holes and watch for any signs of cyber attacks.

The NSA is expanding its fold of hackers, but George said there is a shortage of those skills. “We are straining to hire the people that we need.”

It might seem to be an odd-couple fit — strait-laced government types with their rules and missions trying to recruit hackers who by definition want to defy authorities.

George said the NSA is actually an environment where the hacker mindset fits right in to work with “a critical mass of people that are just like them.”

But what about culture rifts?

“When I walk down the hall there are people that I see every day and I never know what color their hair’s going to be,” George said. “And it’s a bonus if they’re wearing shoes. We’ve been in some sense a collection of geeks for a long, long time.”

The agency has long been known for its brilliant, but sometimes eccentric, mathematicians and linguists.

Jeff Moss, a hacker known as Dark Tangent, knows something about bridging the two worlds. He founded Defcon and the companion Black Hat conference for security professionals and is now a member of the Department of Homeland Security’s Advisory Council, which advises the government on cyber security.

“They need people with the hacker skill set, hacker mind-set. It’s not like you go to a hacker university and get blessed with a badge that says you’re a hacker. It’s a self-appointed label — you think like one or you don’t,” Moss told Reuters.

He drew a distinction between hackers with skills and computer criminals. Of the latter he says with a laugh: “It would not be good to let them in your front door.”

Moss worries about young hackers who might cross lines and end up breaking laws that did not exist when he got his first computer in the early 1980s.

“You can absolutely learn the same skills without breaking any law,” he said.

While U.S. intelligence agencies’ computer systems are believed to be relatively secure, a wave of recent cyber attacks has hit the Pentagon, major defense contractors and others such as the International Monetary Fund.

One government bureaucratic hindrance that can impede hiring top-flight experts is the security clearance process that can take six months, by which time a candidate may have found other employment. For the NSA, prospective employees must pass a lie-detector test, be drug-free for one year and undergo an extensive background check.

Unlike the threat from nuclear weapons where it is clear which countries have that capability, cyber attacks can come from anywhere.

He explained that it was like finding a single needle in a pile of needles — much more difficult than in a haystack. Among constant pings from teenagers just fooling around, “the real bad guy can hide in that noise,” George said. “That’s a big problem for us, trying to identify the real threat from among all the stuff that’s not really threatening.”

George would not name countries that pose high threats but other intelligence officials have expressed concern about China’s growing cyber-warfare capabilities, as well as Russia’s.

The NSA can attract hackers to work within its cloistered walls by dazzling them with the latest technology, appealing to their competitive nature, and giving them a sense of working for the greater good, George said.

“We have a wonderful atmosphere, we have great people and we have the hardest problems on Earth. And we need help, the country needs help,” he said.

But there is one big difference about winning bragging rights at public competitions versus inside the NSA enclosure.

“You’re not going to make yourself famous working here, that’s the downside. You can be internally famous, but you can’t be externally famous,” George said.

“If you come here you really can’t take work home with you,” George said. “That’s a bonus.”