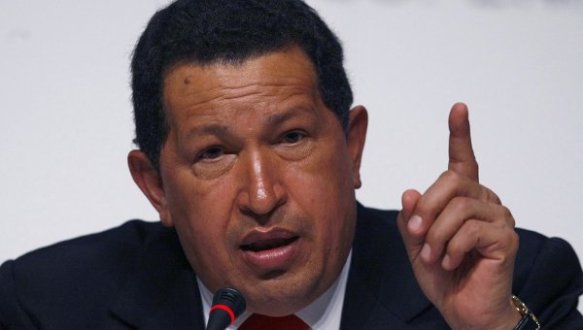 http://en.rian.ru/analysis/20110704/165017942.html
21:21 04/07/2011
Venezuela’s independence from Spain is celebrated on July 5, but it’s unclear if President Hugo Chavez will be able to attend the celebration. If a president can’t make an appearance for his country’s bicentennial, there must be a good reason.

Venezuela appears to be entering a phase of political uncertainty due to Chavez’s health problems. Speaking on television from Cuba, Chavez announced that he underwent surgery to remove a cancerous tumor and that he would have to spend some time recovering. But he promised that he would return home soon. True, Cuba has one of the best healthcare systems in the world and fine doctors. But they can’t work miracles.

Cuba has become a sort of medical ward for ailing political leaders, like Cuba’s own Fidel Castro. Chavez, who will turn 57 at the end of July, has said that Castro is like a father to him.

There are many indications that Chavez’s condition is grave. Usually vibrant and lively, the Venezuelan president appeared haggard during his televised address. Caracas called off a two-day Latin American summit set for July 4-5, timed to coincide with Venezuela’s bicentennial. Latin American integration is one of Chavez’s pet projects, so he would not have postponed the summit without good reason.

In 2012, the country will hold a presidential election, and the opposition is optimistic about its chances. Chavez has won three previous elections by large margins. He has been in office for 12 years, and following the constitutional changes he initiated, he can run as many times as he likes. Chavez is a crafty politician, and this realisation led some opposition members to accuse him of faking his illness to garner him sympathy and support among voters.

But Chavez is smart enough to know that a PR stunt like that could seriously backfire.

His popularity is flagging but his defeat is far from certain. There is no doubt his base is narrowing. In the September 2010 elections, his ruling Partido Socialista Unido de Venezuela (PSUV) won 98 seats in the 165-seat parliament, down from 116 seats. Now it lacks the two-thirds majority needed to pass major legislation.

The trouble with Venezuela is typical of countries with a national idea, politics and administrative structure dominated by one big personality: Chavez’s illness could paralyze the entire government. It has already prompted disarray among his supporters. PSUV members know that “Chavismo” (Chavezism) is impossible without Chavez. Chavismo is a curious brand of Latin American socialism, a mix of the teachings of Christ, Marx and Bolivar (the leader of the national liberation movements in Bolivia and Venezuela in the 19th century) with a dash of ideas from more contemporary thinkers and revolutionaries – from Leon Trotsky to Noam Chomsky.

A new Chavez to replace the old Chavez?

No one knows who will take Chavez’s place if he steps back from politics as Castro has. According to the Venezuelan constitution, the successor should be the vice president, Elias Jaua. The opposition is demanding that Jaua take power, while at the same time noting that a president cannot be absent from his post for more than 180 days. Only in exceptional cases can this period be extended by another 180 days.

Meanwhile, Chavez has not authorized any such transfer of power. In principle, he can run the country from a distance. And in practice, modern technology makes this entirely possible.

But for the moment Venezuela seems to be headed down the same path as Cuba. Chavez’s older brother, Adan Chavez, has begun to speak as often and as loudly as Hugo, acting as his chief adviser. Raul Castro took over for his brother after he stepped down in 2006; could Adan do the same thing? Adan Chavez is far more radical than his younger brother, so it’s not clear that he would continue his brother’s legacy.

Fortunately for Russia, even the anti-Chavez opposition in Venezuela (minus the far-right radicals) value our bilateral relationship and welcomes investments from Russian oil, gas, aluminum, auto and other companies.

The opposition in Venezuela is as colorful as it is disunited. Its main problem is not even Hugo Chavez. It fought so hard against Chavez the man that it seems to have forgotten that this is not enough for victory. You can’t win an election by denouncing the president as a dictator, a madman, a monster and even an ape. The opposition has no platform to offer the country other than dismantling Chavismo.

The opposition cannot even agree on a candidate. It is set to choose one next February. All that is known so far is that two key opposition leaders Manuel Rosales (leader of the right-wing party A New Era) and Leopoldo Lopez (former head of the capital’s fashionable Chacao district) will not run. The former fled to Peru two years ago following accusations of corruption and received political asylum. The latter has been barred by the courts from running until 2014 after being brought up on corruption charges.

Chavez’s illness coincides with a period in which Latin America is shifting away from the left or center-left toward the center-right and right. This is nothing new on this politically volatile continent.

The governments or presidents in Argentina, Brazil, Peru, Ecuador, Venezuela, Chile, Uruguay, Paraguay and, of course, Bolivia could be described as leftist or socialist until the end of last year. This leftward tide began and continued under George W. Bush, who all but forgot about Latin America.

Now, right-leaning leaders have replaced the Socialists in Panama and Chile. Only in Peru has a leftist, Ollanta Humala, been elected president.

The views expressed in this article are the author’s and may not necessarily represent those of RIA Novosti.