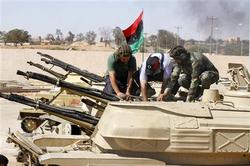 TRIPOLI (Reuters) – The Libyan government on Sunday renewed its offer to hold a vote on whether Muammar Gaddafi should stay in power, a proposal unlikely to interest his opponents but which could widen differences inside NATO.

Pressure is growing from some quarters within the alliance to find a political solution, three months into a military campaign which is costing NATO members billions of dollars, has killed civilians, and has so far failed to topple Gaddafi.

Moussa Ibrahim, a spokesman for Gaddafi’s administration, told reporters in Tripoli the government was proposing a period of national dialogue and an election overseen by the United Nations and the African Union.

“If the Libyan people decide Gaddafi should leave he will leave. If the people decide he should stay he will stay,” Ibrahim said.

But he said Gaddafi — who has run the oil-producing country since taking over in a military coup in 1969 — would not go into exile whatever happened. “Gaddafi is not leaving anywhere, he is staying in this country,” Ibrahim said.

The idea of holding an election was first raised earlier this month by one of Gaddafi’s sons, Saif al-Islam.

The proposal lost momentum when Libyan Prime Minister Al-Baghdadi Ali Al-Mahmoudi appeared to dismiss it. At the time, it was also rejected by anti-Gaddafi rebels in the east of Libya, and by Washington.

Many analysts say Gaddafi and his family have no intention of relinquishing power. Instead, they say, the Libyan leader is holding out the possibility of a deal to try to widen cracks that have been emerging in the alliance against him.

The election proposal could find a more receptive audience this time around, especially after a NATO bomb landed on a house in Tripoli on June 19, killing several civilians.

After that incident, alliance-member Italy said it wanted a political settlement, and also said that the civilian casualties threaten NATO’s credibility.

Libyan government forces have been fighting rebels, backed by NATO air power, since February 17, when thousands of people rose up in a rebellion against Gaddafi’s rule.

The revolt has turned into the bloodiest of the Arab Spring uprisings sweeping the Middle East.

Rebels now control the eastern third of the country, and some enclaves in the West. They have been unable though to break through to the capital, leaving Western powers banking on an uprising in Tripoli to overthrow Gaddafi.

Anti-Gaddafi fighters are trying to push west to Tripoli from Misrata, a city they control 200 km (130 miles) east of the capital. Their way is blocked by Gaddafi forces concentrated in the neighboring town of Zlitan.

A rebel spokesman in Zlitan told Reuters that NATO has been attacking pro-Gaddafi forces in the town from the air.

“NATO has been doing a good job here,” said the spokesman, called Mabrouk. “NATO has given the (pro-Gaddafi) brigades an ultimatum to leave their positions and checkpoints. It expires on June 26, tonight.”

The alliance has in the past transmitted warnings to government troops by breaking into their radio frequencies and by dropping leaflets over their positions.

The rebel spokesman added: “The humanitarian situation is getting worse. There are shortages of foodstuffs and medicine. Fuel and gas do not exist.”

The Libyan leader suffered a propaganda defeat on Saturday when, according to the rebel leadership in eastern Libya, four members of the national soccer team and 13 other football figures defected to the rebels.

Libyans are passionate about the sport and the national team was closely aligned with Gaddafi’s rule. At one point his son, Saadi, played in the side.

Asked about the defections, government spokesman Ibrahim said: “The Libyan football team is full and functioning and performing all of its duties inside and outside Libya.”

A momentary thaw in the fighting allowed the Red Cross to reunite dozens of people, who had been caught on the wrong side of the conflict, with their families.

A ship, the Ionis, arrived in Tripoli’s port on Sunday carrying 106 people from the main rebel stronghold in Benghazi, eastern Libya. Many of the passengers were elderly, and families with small children.

A crowd of a few dozen people waited for the ship to dock, among them Mohammed Al-Gimzi. “I love Muammar Gaddafi very much,” he said.

When Al-Gimzi’s sister disembarked from the ship, he rushed to greet her and the two stood weeping with their heads on each other’s shoulders. “I am very happy to see my sister again,” he said, tears running down his face.

As part of the same exchange, a ship carried around 300 people from Tripoli to Benghazi on Friday. They included dozens of rebel supporters who had been detained and later released.

“This is purely humanitarian, for families to meet with their loved ones and to be able to travel,” Robin Waudo, a spokesman in Tripoli for the International Committee of the Red Cross, said on Sunday.