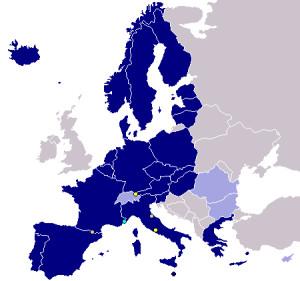 In 1985, the Schengen Agreement paved the way for taking down barriers at border controls between Germany, France and the three Benelux countries — Belgium, the Netherlands and Luxembourg. At the same time, it obligated these countries to better protect their external borders.Signed near the town of Schengen in Luxembourg, it would take until 1995 for the treaty to bring down border gates for good.
Today 25 countries have signed on to the agreement. Even non-European Union members Norway, Iceland and Switzerland are within the Schengen Area. Bulgaria and Romania would also like to join, but have so far failed to meet the requirements.   Schengen membership forbids systematic border controls. While random checks are allowed, anyone with the correct identification will still be allowed to freely cross borders within the area.   Under current rules, Exceptions are permitted only when countries feel their domestic security is threatened. France made use of this rule during the NATO summit in 2009 to conduct controls along the German border to prevent violent demonstrators from accessing the event. Major state visits, high-level meetings among politicians and large sporting events have also prompted temporary border controls in some nations.
But it is not just EU citizens who have enjoyed unprecedented freedom of travel in Europe since the Schengen Agreement was signed. Citizens of other countries with a valid Schengen visa also profit. But if their visa expires, they are required to leave.
More than 400 million people live inside the Schengen zone, which has land borders measuring more than 7,700 kilometers (4,784 miles) in length and sea coast of some 42,700 kilometers.  Rules of the agreement are found in the Schengen Borders Code, which names the conditions under which countries can reinstate border controls. Both Italy and France have recently done so in reaction to the flood of refugees coming from northern Africa following political uprisings there.
Under Article 23 of the Schengen Borders Code, a member can reintroduce controls at inner EU borders “in the event of a serious threat to public order or national security” for a limited time period of 30 days or as long as the threat continues. These security measures must remain in accordance with the code, though. Article 24 requires countries that feel this may be necessary to inform the European Commission and other member states of their reasons for doing so.